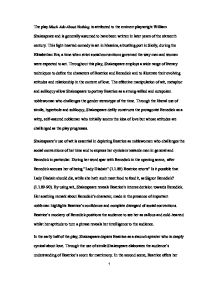 Shakespeare employs a wide range of literary techniques to define the characters of Beatrice and Benedick and to illustrate their evolving attitudes and relationship in the context of love.

The play Much Ado About Nothing is attributed to the eminent playwright William Shakespeare and is generally assumed to have been written in later years of the sixteenth century. This light-hearted comedy is set in Messina, a bustling port in Sicily, during the Elizabethan Era, a time when strict social conventions governed the way men and women were expected to act. Throughout this play, Shakespeare employs a wide range of literary techniques to define the characters of Beatrice and Benedick and to illustrate their evolving attitudes and relationship in the context of love. The effective manipulation of wit, metaphor and soliloquy allow Shakespeare to portray Beatrice as a strong-willed and outspoken noblewoman who challenges the gender stereotype of the time. Through the liberal use of simile, hyperbole and soliloquy, Shakespeare deftly constructs the protagonist Benedick as a witty, self-assured nobleman who initially scorns the idea of love but whose attitudes are challenged as the play progresses. ...read more.

Later in the play, Shakespeare uses soliloquy to inform the audience of Beatrice's transformation from spinster to woman in love. A clever ruse by the characters Hero and Ursula leads Beatrice to expose her true feelings about Benedick to the audience. After overhearing the conversation between Hero and Ursula, Beatrice is convinced that Benedick is passionately in love with her but unable to express his feelings. Beatrice then proclaims, "And Benedick, love on, I will requite thee... To bind our loves up in a holy band,"(3.1.107-116). The use of soliloquy allows the audience a glimpse of Beatrice's inner feelings towards Benedick. Beatrice's statements express to the audience the complete reversal of her previous attitudes towards love and marriage. By her willing acceptance of Benedick's love and the idea of matrimony Beatrice is also shown to conform to the social conventions that she previously ignored. During the first scene of the play, Shakespeare uses puns to depict Benedick as an arrogant yet witty misogynist. ...read more.

In the final scene, Benedick advises Don Pedro "Prince thou art sad, get thee a wife, get thee a wife.."(5.4. 114- 115). The use of repetition enforces the Benedick's new support of marriage and his assumption that matrimony has positively influenced his life. This sudden change of attitude contrasts strongly with his previous stance on the issue of love. Shakespeare positions his audience to view Benedick in a much more positive light as he has shed his misogyny for devotion to Beatrice. Despite the initial opposition of Beatrice and Benedick to the idea of love and each other, by the conclusion of the play through an elaborate ruse played out by their friends they are reconciled and even fall in love. In the play's opening scenes the pair are depicted as staunch bachelors exchanging barbed remarks and assaulting each other with their wit. The characterisation of Beatrice and Benedick and the transitions of their relationship from "merry war" (1.1.45) to happy couple are integral to the depiction of the play's message: that no one is immune to love. ?? ?? ?? ?? 1 ...read more.