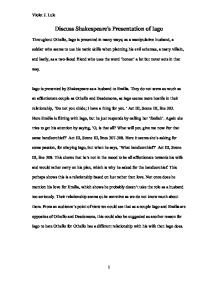 Discuss Shakespeare's Presentation of Iago Throughout Othello, Iago is presented in many ways; as a manipulative husband, a soldier who seems to use his tactic skills when planning his evil schemes, a nasty villain, and lastly, as a two-faced friend who uses the word 'honest' a lot but never acts in that way. Iago is presented by Shakespeare as a husband to Emilia. They do not seem as much as an affectionate couple as Othello and Desdemona, as Iago seems more hostile in their relationship, 'Do not you chide; I have a thing for you.' Act III, Scene III, line 303. Here Emilia is flirting with Iago, but he just responds by calling her 'foolish'. Again she tries to get his attention by saying, 'O, is that all? What will you give me now For that same handkerchief?' Act III, Scene III, lines 307-308. Here it seems she's asking for some passion, for obeying Iago, but when he says, 'What handkerchief?' Act III, Scene III, line 308. This shows that he's not in the mood to be all affectionate towards his wife and would rather carry on his plan, which is why he asked for the handkerchief. This perhaps shows this is a relationship based on lust rather then love. Not once does he mention his love for Emilia, which shows he probably doesn't take the role as a husband too seriously. Their relationship seems quite secretive as we do not know much about them. ...read more.

Iago is angry at what he's just heard and his aggression gets even worse when he starts calling Othello racists names behind his back, 'Moor' and 'black ram'. Apart from Roderigo, Iago is the only character to call Othello such racist names, which shows since he was not promoted to lieutenant he's only seeing Othello for the colour of his skin instead of for who he is. This may suggest that now Iago sees Othello as a he will show no sympathy for him whatever he plans. Iago reveals his plans in soliloquies. His training in the military makes his plans effective, especially where he plans Othello's downfall, 'After some time, to abuse Othello's ear That he is too familiar with his wife;', Act I, Scene III, lines 386-388. Here he is already strategically planning what to do to ruin Othello's life. He also becomes quite paranoid, 'And it is thought abroad that 'twixt my sheets,' Act I, scene III, line 378. It could be this paranoia which drives him to his evil schemes. Alternatively it could be a convenient motive for him to carry on doing his evil deeds, as a way of justifying his actions so he can truly believe it for himself. Shakespeare presents Iago as the villain of the play; he is the one that controls everything that is going on. He gets Cassio fired from being a lieutenant and also uses Emilia to get the handkerchief when he knows that the handkerchief is a symbol of Othello's and Desdemona's relationship, '...She dying gave it to me, And bid me when my fate would have me wive,' Act III, Scene IV, lines 59-60. ...read more.

being evil and acting as a good friend). It is easy for Iago to trick Othello as he thinks that Iago is telling the truth. The more that Iago does this, the more of 'the green eyed monster' we see inside Othello, which brings Othello to his downfall; the only person he listens to at this stage is Iago. Even when Desdemona pleads with him that she's telling the truth he doesn't listen, 'Offend you in my life; never lov'd Cassio', Act V, Scene II, line 59. Here she begs for forgiveness but Othello is filled up with Iagos lies to listen to what she has to say. Iago is a typical villain. He is very evil minded, as we can see when he tricks Othello into thinking that Cassio is after Desdemona, 'Look to your wife, observe her well with Cassio;', Act III, Scene III, line 199. I don't think that Iago's inherently evil, but what seems to start all this is the fact that he wasn't made lieutenant. Even after being made lieutenant he carries on being disloyal to people, most likely because no-one seems to have caught him out and he's always getting away with it. By seeing other people suffer he seems to get filled with pleasure about it. Even after doing all those villainous crimes he still lives at the end of the play, whilst the people he tricked either died or suffered in great pain. I think this sort of behaviour makes him a perfect villain. ?? ?? ?? ?? Violet J. Lule 1 ...read more.