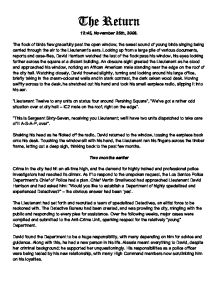 Shaking his head as he flicked off the radio, David returned to the window, tossing the earpiece back onto his desk. Touching the window sill with his hand, the Lieutenant ran his fingers across the timber frame, letting out a deep sigh, thinking back to

The Return 12:45, November 25th, 2008. The flock of birds flew gracefully past the open window, the sweet sound of young birds singing being carried through the air to the Lieutenant's ears. Looking up from a large pile of various documents, reports and case-files, David Harrison watched the last of the flock pass his window, his eyes looking further across the square at a distant building. An obscure sight greeted the Lieutenant as he stood and approached his window, noticing an African American male standing near the edge on the roof of the city hall. Watching closely, David frowned slightly, turning and looking around his large office, briefly taking in the cream-coloured walls and in stark contrast, the dark oaken wood desk. Moving swiftly across to the desk, he stretched out his hand and took his small earpiece radio, slipping it into his ear. "Lieutenant Twelve to any units on status four around Pershing Square", "We've got a rather odd situation over at city hall - IC2 male on the roof, right on the edge". "This is Sergeant Sixty-Seven, receiving you Lieutenant; we'll have two units dispatched to take care of it A-S-A-P, over". Shaking his head as he flicked off the radio, David returned to the window, tossing the earpiece back onto his desk. Touching the window sill with his hand, the Lieutenant ran his fingers across the timber frame, letting out a deep sigh, thinking back to the past few months. ...read more.

David ignored several greetings by fellow officers, his momentum carrying him out of the building quickly. A black sentinel awaited David outside of the Police Department, its dark, seemingly unreflective surface providing a sense of foreboding. Two men in black suits exited the sentinel, motioning for David to step inside. The suited, presumed now to be Agents, watched the surrounding area, strangely deserted for mid-afternoon. As David slid into the sentinel, the two Agents slid in beside him, either side, the sentinel speeding off swiftly out of Pershing Square. The sentinel continued through the city, driving through various alleyways and taking misleading directions, to a location obviously meant to be a secret. Two hours later Sitting in the middle of the room, David looked up at the Regional Director, listening intently, barely catching every word. "You are needed...country requires it...special assignment...you're identity...we'll sort it all out...next week...private plane". As the Director finished, he looked directly at David, not an expression showing on his face as he asked his only question: "Do you accept?". David considered the story he'd just been told, and the implications of accepting and not; his mind racing as he looked back at the Director, barely being able to make eye-contact. "Yes, Sir, I accept". One week later The events of the past hour had gone by in a blur, and so far the plan was going perfectly, Sergeant Late had taken the bait and Commander Sokolov had taken action. ...read more.

"You'll find everything you need inside the folder"; "You will be escorted to the airport and then flown to Washington via private jet. You'll meet with your contact there, and you will go from there". Looking back at the screen, David nodded once; "I understand". Fixing his eyes on David, the Director killed the display as his last words went through the speakers; "Good luck Harrison, see you in a year". One Year Later, Present Day The sleek, black jet hit the runway softly, its wheels screeching for a moment, the pilot slowly edging the plane into its respective private hangar. Several minutes later, the stairs were deployed from the plane, a lone figure appearing at the top of the stairs. David Harrison looked down the stairs around the hangar, descending slowly as he looked to the suited man at the bottom. Smiling, David extended his arm, taking the man's hand in his and shaking it firmly, letting out a small sigh. "It's been a long time. It's great to see you again Jack". Looking at Jack, David felt a rush of old, suppressed memories floating back, of the LSPD and the great number of friends he had made. Following Jack, David left the hangar, entering a black, tinted-window vehicle outside, leaving the airport in a most casual manner. The fading sun was setting on the horizon, sending beautiful rays of light across the tarmac, as the day came to an end. It was the beginning of something new, with an old city, greeting an old friend. ...read more.