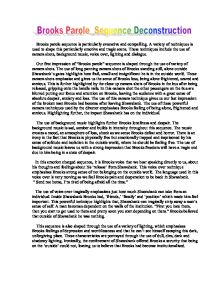 Brooks parole sequence is particularly evocative and compelling. A variety of techniques is used to shape this particularly emotive and tragic scene. These techniques include the use of camera shots, background music, voice over, lighting and dialogue. Our first impression of "Brooks parole" sequence is shaped through the use of variety of camera shots. The use of long panning camera shots of Brooks standing still, alone outside Shawshank's gates highlights how frail, small and insignificant he is in the outside world. These camera shots emphasise and gives us the sense of Brooks loss, being alone frightened, scared and anxious. This is further highlighted by the close up camera shots of Brooks in the bus after being released, gripping onto the handle rails. ...read more.

There is an irony in the fact that Brooks is physically free but emotionally trapped and imprisoned by his sense of solitude and isolation in the outside world, where he should be feeling free. The use of background music leaves us with a strong impression that Brooks freedom will have a tragic end due to him being in a state of despair. In this emotion charged sequence, it is Brooks voice that we hear speaking directly to us, about his thoughts and feelings about his 'release' from Shawshank. This voice over technique emphasizes Brooks strong sense of not belonging on the outside world. The language used in this voice over is very moving as we feel Brooks pain and desperation to be back in Shawshank. ...read more.

Ironically, the confinement of Shawshank offered Brooks a security that being on the 'outside' could not, leaving us to believe that Brooks had become institutionalised. Dialogue is another strong technique used by the director to show a startling contrast in the language used by the guards who farewell Brooks. They shake his hand and wish him 'good luck'. Their language and their treatment of Brooks contrasts markedly to what we have seen and heard within Shawshank. The cruelty, brutality and taunting are gone. The words and gestures used by the guards highlights the respect they have for Brooks and for us makes his leaving a lot more touching. This evocative and compelling parole sequence is shaped through the use of many techniques, which leads us towards the tragic ending of Brooks at the end of this sequence. By : Nawshin Nur ...read more.