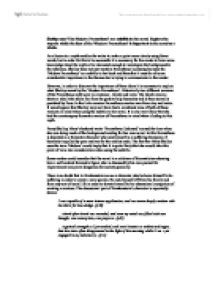 Shelley uses 'The Modern Prometheus' as a subtitle to the novel. Explore the ways in which the idea of the 'Modern Prometheus' is important to the novel as a whole. An allusion to a myth enables the writer to make a point more clearly using fewer words, but in order for this to be successful it is necessary for the reader to have some knowledge about the myth or be interested enough to investigate the background to the reference. Shelley does not just mention Prometheus in passing but uses the 'Modern Prometheus' as a subtitle to her book and therefore it must be of some considerable importance to the themes she is trying to communicate to the reader. However, in order to discover the importance of these ideas it is necessary to explore what Shelley meant by the 'Modern Prometheus'. Historically two different versions of the Prometheus myth were in existence - Greek and Latin. The Greek version shows a rebel who steals fire from the gods to help humanity and is then eternally punished by Zeus. In the Latin version Prometheus creates man from clay and water. It would appear that Shelley may well have had a combined view of both of these versions in mind when using the subtitle to her novel. ...read more.

In one of the myths Prometheus is punished for his actions by having his liver constantly eaten and regenerated. This leads the Promethean view that those who exceed society's boundaries will be punished for their actions. This is a strong theme in the novel and we see this demonstrated at the beginning of the novel, when Shelley using the epistolary form of narration, has Walton reporting a conversation to his sister: I would sacrifice my fortune, my existence, my every hope, to the furtherance of my enterprise. Frankenstein immediately responds with an emotional warning: Unhappy man! Do you share my madness? Have you drunk also of the intoxicating draught? Hear me - let me reveal my tale, and you will dash the cup from your lips. (p29) In the journal recording the first person narrative that follows the initial letters, we see Frankenstein punished for his actions by the deaths of all of his family and his need to pursue the creature until the death of either himself or the creature Frankenstein could also have been a 'modern' Prometheus because his creation was not made from clay images but rather produced by what Shelley saw as more modern scientific means. ...read more.

Consequently the Gothic imagery leaves one with ambiguous views which different readers will interpret in different ways. Whether or not one sees a Modern Prometheus as a creator, a being who believes himself to be superior to the gods and therefore able to take things into his own hands or as a suffering champion of mankind, one can see that there are many elements in the book that could be seen to support the view that the idea of the Modern Prometheus is an important aspect of the book. Shelley has drawn widely on her reading and knowledge and that whilst it could be argued that she is not using any of the myths or contempory poems exclusively, she does seem to have taken elements from all of them and used them when it has enhanced her own novel. However, it is important to recognise that many other myths, legends and poems such as Coleridge's 'Rime of the Ancient Mariner' and Milton's 'Paradise Lost' are referred to either directly or indirectly. In addition to this much had been happening on a political level such as the French Revolution and new scientific theories were being advanced. Shelley was obviously a well read person and therefore it is almost inevitable that all of this would have influenced her thoughts and consequently contributed to the novel and the important morals that Shelley intended the reader to draw. ...read more.