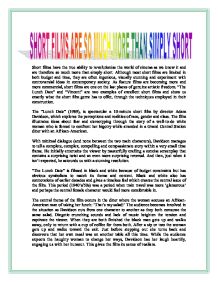 Short Films are so much more than short

Short films have the true ability to revolutionise the world of cinema as we know it and are therefore so much more than simply short. Although most short films are limited in both budget and time, they are often ingenious, visually stunning and experiment with controversial ideas in contemporary society. As feature films are becoming more and more commercial, short films are one on the last places of genuine artistic freedom. "The Lunch Date" and "Vincent" are two examples of excellent short films and show us exactly what the short film genre has to offer, through the techniques employed in their construction. The "Lunch Date" (1989), is spectacular a 10-minute short film by director Adam Davidson, which explores the perceptions and realities of race, gender and class. The film illustrates ideas about fear and stereotyping through the story of a well-to-do white woman who is forced to confront her bigotry while stranded in a Grand Central Station diner with an African-American. ...read more.

Diegetic crunching sounds and lack of music heighten the tension and captivate the viewer. When they are both finished the black man gets up and walks away, only to return with a cup of coffee for them both. After a sip or two the woman gets up and walks toward the exit. Just before stepping out she turns back and discovers that her own meal was on another table all this time. While the audience expects the haughty woman to change her ways, Davidson has her laugh heartily, engaging us with her humour. This gives the film its sense of realism. The "Lunch Date" is a rare short story which can both entertain the viewer and carry important message of prejudice. "Vincent" is another short film through where its various, brilliant techniques demonstrates just how much short film genre has to offer. "Vincent" is a 1982 stop-motion short film written, designed and directed by Tim Burton and Rick Heinrichs. ...read more.

Without the use of colour to establish spatial separation and define areas of screen space, the combination of 2D and 3D spatial representations is distilled and clarified. Black and white also reinforces the binary juxtapositions throughout the film: Burton effectively opposes light or high key scenes for Vincent's normal childhood with dark or low key scenes for his imagined torments. Throughout the film, Burton mainly uses match cutting to visualize Vincent's identification with Vincent Price, which provides a series of trick transitions between Vincent-as-himself and Vincent-as-Vincent Price. Each of these cuts appear temporarily continuous, but as Vincent transforms between himself and Price, the filmic space fluctuates between spatial continuity and discontinuity. The film goes in and out of Vincent's own reality. In conclusion, short films have the true ability to revolutionise the world of cinema as we know it and are therefore so much more than simply short. Not only can they be funny and quirky, but the can also be both intriguing and beautiful. Short films are one of the last forms of artistic freedoms and play a crucial role in our society. By Anthony Sakiris ...read more.