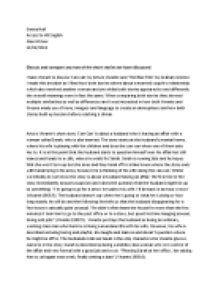 Short stories. I have chosen to discuss Can-can by Arturo Vivante and The Blue Film by Graham Greene.

ï»¿Emma Hall Access to HE English Glen McIver 12/02/2012 Discuss and compare any two of the short stories we have discussed I have chosen to discuss ‘Can-can’ by Arturo Vivante and ‘The Blue Film’ by Graham Greene. I made this decision as I liked how both stories where about a married couple’s relationship which also involved another woman and yet whilst both stories appeared to end differently the overall meanings were in fact the same. When comparing both stories they showed multiple similarities as well as differences and I was interested in how both Vivante and Greene made use of irony, imagery and language to create an atmosphere and how both stories built up tension before reaching a climax. Arturo Vivante’s short story ‘Can-Can’ is about a husband who is having an affair with a woman called Sarah, who is also married. The story starts at the husband’s marital home, where his wife is playing with the children and does the can-can when one of them asks her to. It is at this point that the husband starts to question himself over his affair but still leaves and heads to a café, where he waits for Sarah. Sarah is running late and he hopes that she won’t turn up but she does and they head off to a lake house where the story ends with Sarah lying in his arms, however he is thinking of his wife doing the can-can. ...read more.

Mrs Carter complains that the holiday is tedious, and urges her husband to take her to ?Spots?. Mr Carter leaves the hotel in search of something. A little boy comes up to him and, after turning down his offers of a young girl and a boy, Mr Carter takes him up on the offer of a French film. Returning to the hotel, he picks up his wife and they set off together to watch the film. Mrs Carter finds the first film unattractive, but the second has ?some charm?. It is not for some time, though, that Mr Carter realises that the film is familiar to him. When he does realise, he tries to get Mrs Carter to leave, but she refuses. It turns out that thirty years ago Mr Carter had been attracted to the young woman in the film. She had needed money, and he had helped her out by acting as her partner in the film. On the way back to the hotel, Mrs Carter professes herself shocked, but when they get back to their room she is in fact aroused, and makes love to her husband with a passion she has not known for years. Greene tells us straight away in the first line of the story that something is wrong with this couple and that they are not happy. ?Other people enjoy themselves, Mrs Carter said? (Greene 1982:74). ...read more.

and it is the girl in the film that he is thinking of at the end of the film. Greene creates a lot more imagery in terms of the setting, his wife, himself and the girl in the film whereas Vivante?s main use of imagery is his wife doing the can-can. In comparison whilst there are several differences there are also similarities. Vivante and Greene have written both Can-Can and The Blue Film in the third person and tell you what the husbands are thinking and feeling, guilt, tension, nervousness and uncertainty, both depicting the husbands as being in conflict with themselves and their decisions. ?Carter lay in the dark silent, with a feeling of loneliness and guilt? (Greene 1982:79). Both stories have lots of irony, ?For a moment I was afraid you where thinking of your wife? (Vivante 1988:6) and the same theme of a husband having feelings for another woman outside of his marriage and the events that take place in both stories are that the husband makes love with this other woman. The openings of each story are similar and we know straight away that something isn?t right and whilst initially we believe that the endings are different, with Vivante ending Can-Can with the husband thinking of his wife and Greene ending The Blue Film with the husband thinking of the other woman, the prostitute, they are actually ending very similarly. Both husbands are thinking of the women they actually love and the ironic ending in both stories is that both are experiencing that the grass isn?t always greener on the other side. ...read more.