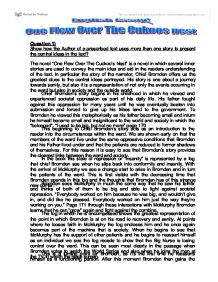 Show how the Author of One flew over the cuckoos nest uses more than one story to present the central ideas in the text?

Question 1) Show how the Author of a prescribed text uses more than one story to present the central ideas in the text? The novel "One Flew Over The Cuckoo's Nest" is a novel in which several inner stories are used to convey the main idea and aid in the readers understanding of the text. In particular the story of the narrator, Chief Bromden offers us the greatest clues to the central ideas portrayed. His story is one about a journey towards sanity, but also it is a representation of not only the events occurring in the ward but also in society and the outside world. Chief Bromden's story begins in his childhood in which he viewed and experienced societal oppression as part of his daily life. His father fought against this oppression for many years until he was eventually beaten into submission and forced to give up his tribes land to the government. To Bromden he viewed this metaphorically as his father becoming small and inturn he himself became small and insignificant to the world and society in which the "belonged". ...read more.

"Everybody worked on him because he was big, and wouldn't give in, and did like he pleased. Everybody worked on him just the way they're working on you." Page 171 through these interactions with McMurphy Bromden learns that he can "grow" again and fight against the combine. The fog in which he is encompassed shows the greatest representation of the point in which Bromden is at on his road to recovery and sanity. At points where he looses faith in McMurphy the fog encloses him and he once again becomes part of the machine that is society. When he begins to see that McMurphy has the support of other patients and he begins to reassert himself as an individual we see the fog recede to show that the Big Nurse is losing control over the ward. This can be seen most clearly in the passage when Bromden votes to watch the World Series and also when he joins the men at the TV to watch the black screen. ...read more.

As a symbol of the end of Bromden's journey and inturn the Wards journey towards sanity and freedom, Bromden "grows" and is able to pick up the concrete control panel and break the window to escape. This is significant as it represents the escape of McMurphy's spirit, the escape of Nurse Ratched's control and also the escape of the patients, many of who leave the ward soon after that. Bromden's story throughout the novel relates the events in the ward to events in his previous and present life through the anecdotes about his father and life out in the "open world" as part of society. The events that constitute Bromden's story easily parallel the events that occur to the patients in the ward and aid in our overall understanding of the novel. By seeing the stories through Bromden's eyes we also gain entry to his thoughts to clarify the proceedings occurring around the patients. The themes of making rational choice and regaining individuality are expressed through these thoughts and stories. These all combine in encompass an individual image of gaining freedom and the prices that must be paid along to way. Spencer Harrison ...read more.