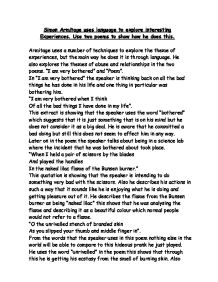 Simon Armitage uses language to explore interesting experiences. Use two poems to show how he does this.

Simon Armitage uses language to explore interesting Experiences. Use two poems to show how he does this. Armitage uses a number of techniques to explore the theme of experiences, but the main way he does it is through language. He also explores the themes of abuse and relationships in the two poems. "I am very bothered" and "Poem". In "I am very bothered" the speaker is thinking back on all the bad things he has done in his life and one thing in particular was bothering him. "I am very bothered when I think Of all the bad things I have done in my life". This extract is showing that the speaker uses the word "bothered" which suggests that it is just something that is on his mind but he does not consider it as a big deal. He is aware that he committed a bad doing but still this does not seem to affect him in any way. ...read more.

Also from this quotation the speaker is trying to say that he has branded this girl for life to show that she will always be his. This is also de-humanising because it is only animals that are branded with hot metal poles. Therefore it shows that he is making the girl look as low as an animal. Just this one phrase or quotation could make him be considered as a psychopath or an extremely dangerous person. "Don't believe me, please, if I say That was just my butterfingered way, at thirteen, Of asking you if you would marry me." This shows that he is a very immature little child who is playing a trick on a girl and uses a lame excuse of saying that was his way of asking her if she would marry him. But obviously he is not telling the Girl that he wants to marry her he first say "don't believe me, please" So this shows that he was directly lying but concealing it in a very clever way. ...read more.

"And praised his wife for every meal she made. And once for laughing punched her in the face." This quotation is very effective because it shows how unpredictable this woman's husband is. It shows that the man at one moment in time can be so nice and praises his wife for everything she does, and the next minute he just switches and for the most normal thing like laughing he punches her in the face. This shoes that this woman's husband has serious personality problems. "And he blubbed when she went from bad to worse And twice he lifted ten pounds from her purse." From this we understand that his mum was ill and he started crying this could be considered as normal but he did not just start crying he was "blubbing" this is very childish so he can go from a man to child. Also the next line shows that he thieved money from his mother even though she was that ill. This also shows that he has no feelings for others around him. In conclusion these two poems explore the same themes. ...read more.