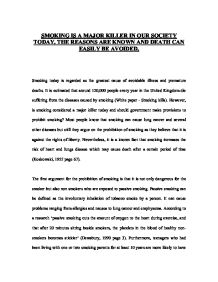 Smoking is a major killer in our society today

SMOKING IS A MAJOR KILLER IN OUR SOCIETY TODAY. THE REASONS ARE KNOWN AND DEATH CAN EASILY BE AVOIDED.

Smoking today is regarded as the greatest cause of avoidable illness and premature deaths. It is estimated that around 120,000 people every year in the United Kingdom die suffering from the diseases caused by smoking (White paper - Smoking kills). However, is smoking considered a major killer today and should government make provisions to prohibit smoking? Most people know that smoking can cause lung cancer and several other diseases but still they argue on the prohibition of smoking as they believe that it is against the rights of liberty. Nevertheless, it is a known fact that smoking increases the risk of heart and lungs disease which may cause death after a certain period of time (Koskowski, 1955 page 67).

The first argument for the prohibition of smoking is that it is not only dangerous for the smoker but also non smokers who are exposed to passive smoking. Passive smoking can be defined as the involuntary inhalation of tobacco smoke by a person. It can cause problems ranging from allergies and nausea to lung cancer and emphysema. According to a research ‘passive smoking cuts the amount of oxygen to the heart during exercise, and that after 20 minutes sitting beside smokers, the platelets in the blood of healthy non-smokers becomes stickier’ (Dewsbury, 1990 page 3). Furthermore, teenagers who had been living with one or two smoking parents for at least 10 years are more likely to have higher levels of blood clotting chemicals (Rumbelow, 2000 page 13). Passive smokers alternatively have a 30 percent higher risk of lung cancer and a 24 percent higher risk of heart attack. A landmark study concluded that children are more likely to suffer from asthma and respiratory diseases if their parents are smokers. It is calculated that around 46, 500 children every year suffer from asthma due to the smoking of their parents (Dunlevy, 1997 page 16). An article by Dr Jane Collins shows that over 17, 000 children under 5 are admitted to the hospital in a single year because of passive smoking. It has been also estimated that 25 percent of cot deaths could be caused by mothers smoking; women who smoke while pregnancy are likely to reduce birth weight, and damage the health of their babies.

The second primary health risk related with smoking is cancer, in which lung cancer is the most common form and causes over 20,000 deaths in the UK every year.  A research reveals that nine out of ten lung cancers are caused by smoking, and every year there are more than 38,000 new cases in the UK (Hull Daily Mail, 2003 page 13). Although, non-smokers can also get lung cancer but it is very rare and the risk for smokers is thirty times higher or depends on the number of cigarettes smoked per day. Smoking is responsible for the 87% of all lung cancer related deaths and is the leading source of death in both men and women. It can cause disease not only in organs directly exposed to tobacco smoke, such as mouth and lung, but also in distant organs, such as the bladder and possibly the mammary gland. It has been shown that smoking increase the risk of having mouth cancer four times than for a non smoker and can start in many areas of mouth, with the most common being on the lips or on underneath the tongue. It develops gum disease which attacks the ums, ligament and bone that supports teeth and anchors them in the jaw. Some other types of cancer caused by smoking are bladder, throat, kidney, stomach and pancreas (Auerbach, 1957 page 74).

Moreover, smoking results in a fifth of all heart disease deaths. It increases the risk of heart attacks and other heart diseases as the blood is more likely to clot due to smoking. The chance of a heart attack increases when a person is in 30s or 40s of his age. The arteries are harden by the use of tobacco which can later on be blocked and starve the heart of blood flow, causing the attack. The director of Action on Smoking and Health said that there are effects of smoking on heart because the circulation is very sensitive (Rumbelow, 2000 page 13). It is believed that nicotine produces the effects on heart and the chance of cardiovascular disease, including the strokes and coronary heart disease increases because of the carbon monoxide present in the smoke. The effect of nicotine also increases the risk of congestive heart failure and according to a research, around 1000 women under the age of 40, every year deal with a heart attack because of smoking. Furthermore, Melanie Johnson, the Public Health minister said, ‘the effect of smoking on the heart and arteries is hugely damaging. Cigarette smoke starves the heart of oxygen and nicotine increases heart rate and blood pressure. Currently one in seven deaths from coronary heart disease is directly linked to smoking’ (Laurance, 2004 page 17).

Another effect of smoking is the premature aging which is the effect on skin and tissue oxygen. In 1985, the smoker face was described as having one or more of the features that are, ‘prominent lines or wrinkles; a gauntness of features with prominence of the underlying bony contours; an atrophic, slightly pigmented gray appearance; and a plethoric, slightly orange, purple and red complexion.’ It has been demonstrated that smokers have rough skin and more wrinkles as smoking reduces the blood supply to the skin and the level of vitamin A is lowered. It is also considered that women may be more vulnerable to the wrinkling effects of smoking than men (Leow and Maibach, 1997 page 31). The elastic fibres of the dermis are damaged by cigarettes and it promotes the elastosis same as in a sun exposed skin.   A study suggests that the skin damage produced by a burning cigarette is just like continuously exposing the skin to ultraviolet light and infrared irradiation. This can cause extreme damage, and cigarettes also give the smoker an aged appearance at an early age. This is because the blood flow is reduced after smoking a cigarette. The viscosity of the blood is increased and can disrupt the platelet function in the blood which can severely affect the smoker when being injured. Also smokers are five times more likely to have wrinkles in their skin on the face then non-smokers (Canny and Goodrich, 2001 page 722). Another characteristic of a smoker is the blood flow in different parts of the body. A study concluded that the blood flow in the fingers changed significantly after smoking while the blood flow in the toes did not change respectively (Leow and Maibach, 1997 page 31).

In conclusion, the war on smoking is still ongoing. The government should ban private establishments and public areas to prevent passive smoking from affecting innocent people. Smoking areas should be tied off from the general public because of the health risks involved with passive smoking. Smokers should be encouraged to quit smoking with realistic methods available at suitable prices as for example nicotine gum, or nicotine patches. Schools, universities and public television channels should all broadcast and educate people about the risks involved with cigarettes and how to effectively quit smoking for good.