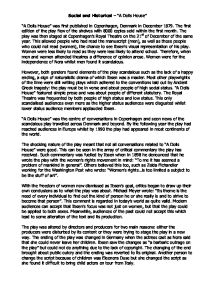 Social and Historical - "A Dolls House" "A Dolls House" was first published in Copenhagen, Denmark in December 1879. The first edition of the play flew of the shelves with 8000 copies sold within the first month. The play was then staged at Copenhagen's Royal Theatre on the 21st of December of the same year. This allowed people who had read the manuscript (men), as well as those people who could not read (women), the chance to see Ibsen's visual representation of his play. Women were less likely to read as they were less likely to attend school. Therefore, when men and women attended theatres a difference of opinion arose. Women were for the independence of Nora whilst men found it scandalous. However, both genders found elements of the play scandalous such as the lack of a happy ending, a sign of naturalistic drama of which Ibsen was a master. Most other playwrights of the time were still writing plays which adhered to the conventions laid out by Ancient Greek tragedy: the play must be in verse and about people of high social status. ...read more.

With the freedom of women now dismissed as Ibsen's goal, critics began to draw up their own conclusions as to what the play was about. Michael Meyer wrote: "Its theme is the need of every individual to find out the kind of person he or she really is and to strive to become that person". This comment is regarded in today's world as quite valid. Modern audiences can accept that Ibsen's focus was not just on women, but that the play could be applied to both sexes. Meanwhile, audiences of the past could not accept this which lead to some alteration of the text and its production. The play was altered by directors and producers for two main reasons: either the producers were disturbed by its content or they were trying to stage the play in a new way. The ending of the play was changed in Germany when the actress cast as Nora said that she could never leave her children. Ibsen saw the changes as "a barbaric outrage on the play" but could not do anything due to the lack of copyright. ...read more.

Laura's husband, like Torvald, became ill forcing the couple abroad. Nora arranged a loan with the help of a friend so that her husband did not know anything. Once her husband got better she wrote about her ordeal and tried to sell the story in the form of a novel to pay for the debt. She asked Ibsen for his assistance with this but he wrote back to Laura and advised her to take up the matter with her husband. Ibsen believed that Laura was hiding something from the husband and believed that the husband should take responsibility for her troubles. Laura had not told her husband anything about the loan as she was too scared. When she received the letter from Ibsen saying he would not publish the novel she forged a check to pay back the loan. However, the forgery was discovered and Laura was forced to tell her husband everything. Laura's husband was enraged and filed for separation. As a result, Nora suffered a mental breakdown and had to go to a mental hospital. When she was released from the institution she begged her husband to take her back. I believe that there are obvious parallels here between Nora and Laura ...read more.

This response is in receipt of a question that asks candidates to consider the social and historical influences that drove Henrik Ibsen to writing the play 'A Doll's House'. The wildly controversial play was the first of it's kind in ...

This response is in receipt of a question that asks candidates to consider the social and historical influences that drove Henrik Ibsen to writing the play 'A Doll's House'. The wildly controversial play was the first of it's kind in that it introduced an entirely naturalistic play, severing the theatre-going public's relationship with the melodrama of Greek Theatre, which Ibsen felt was crushing the realism of theatre, which had the potential to represent so much more. The candidate here demonstrates a very good understanding of the social relationships of the time and appreciates a number of different attitudes and responses to the play. Where a lesser ability candidate may fall down is that they generalise views on the play at it's time of publication too simply, but this candidate realises that different people of different sexes and different social backgrounds would react differently to the same content; a tribute to the versatility of naturalistic theatre.

The Level of Analysis shown by this candidate is indicative of a very high B/low A grade for A Level. There is a sound appreciation of the content of the play and the context in which it was birthed, as well as a sensitive appraisal of the multitude of varying responses the play got, ranging from support and encouragement to sneers and condemnations for actively promoting scandals that would never have been tolerated in a Danish society at the time. The is evidence that this candidate has conducted external, independent research in order to fortify their answer, by quoting critics and commentators on the play's themes and story-line. This kind of enthusiasm is greatly appreciated by examiners who, after reading a hundred other copies of the same essay, are very grateful for this extra insight that can set and answer far and away above other standard essays that comprise only of regurgitated classroom information.
One minor irk I do have with this essay though, and the reason it is not perfect, if that after such an impressive introductory paragraph and subsequent analysis, there appears to be no conclusion. Conclusions and introductions will not win any extra marks for insight and knowledge, but both are to be considered something of bookend for the bulk of the essay - and conclusions are important because they consolidate all the ideas that are explored in the above paragraphs. It is therefore imperative that one is written.

The Quality of Written Communication here is very good throughout, save for a few moments where the candidate makes silly mistakes that could easily be rectified if the answer were read and re-read. One such error is where they refer to the play as a "novel" at one point. Another would be when they mistake "Laura" with the character of Nora, when comparing Ibsen's character with a real life parallelism. These are minor irks and do not necessarily compromise the clarity of written communication, though they should be noted and corrected before submission of coursework/closure of the exam booklet.