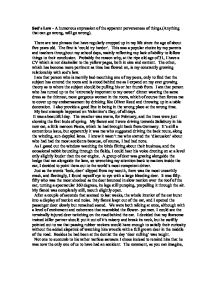 Sod's Law - A humorous expression of the apparent perverseness of things.(Anything that can go wrong, will go wrong).

Sod's Law - A humorous expression of the apparent perverseness of things.(Anything that can go wrong, will go wrong). There are two phrases that have regularly cropped up in my life since the age of about five years old. The first is 'could try harder'. This was a popular choice by my parents and teachers throughout my school days, mainly reflecting my lack of ability to follow things to their conclusion. Probably the reason why, at the ripe old age of 31, I have a CV which is not dissimilar to the yellow pages, both in size and content. The other, which has become more pertinent as time has flowed on, is my constantly growing relationship with sod's law. ...read more.

My fianc� and I were driving towards Salisbury in his new car, a little maroon Fiesta, which he had brought back from Germany. It's still a contentious issue, but apparently it was me who suggested driving the back route, along the winding, sun-dappled lanes. I know it wasn't me who started the 'discussion' about who had had the most accidents because, of course, I had had none. As I gazed out the window watching the birds flitting about their business, and the occasional rabbit bounding through the fields, I could hear his voice droning on at a level only slightly louder than the car engine. A group of deer was grazing alongside the hedge that ran alongside the lane, so wrenching my attention back to matters inside the car, I decided to point them out to the world's most competent driver. ...read more.

I could see the terminally injured deer twitching on the road behind the car. I decided that my fearsome trained killer partner should put it out of it's misery and break its neck, but he swiftly pointed out to me that passing rubber neckers would have enough to satisfy their curiosity without the added slapstick of watching him wrestle with a full grown deer in the middle of the road. Besides he had been at the dentist the day 'deer culling' was taught. Not one to succumb to his rather tactless sarcasm I chose instead to remind him that he was now the only one of us to have had an accident. The comment, as you can imagine, was not well received. In fact all I got in return was a stony silence all the way home in the tow truck. ...read more.