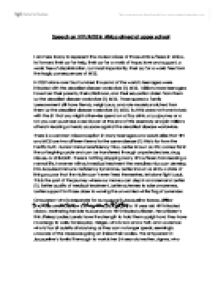 One person who is desperate for our support is Jacqueline Barasa, (show pictures on slideshow during this paragraph) a 19 year old HIV infected widow, mothering her late husbands two HIV infected children. Her children's thin, lifeless bodies barely have the strength to hold them upright and they have no energy to walk, far less play. Helger, who is two and a half, and Lawrence who is four sit quietly all day long as they can no longer speak, seemingly unaware of the massacre going on inside their bodies. The only person in Jacqueline's family fit enough to work is her 54 year old mother, Agnes, who labours daily in a gallant bid to feed and care for her daughter and Grandchildren. Her work is rarely enough to even provide a meal a day for her relatives because after three years of drought, the field that used to provide them with maize and vegetables is now bare. ...read more.

Our children and their children in around 50 years from now will ask; what did you do while 40 million children became orphans in Africa because of HIV? I want to be able to say our generation stood up and did what is right for mankind, but I cannot do this alone, your help is needed. Let me assure you that your �1 will be solely invested in helping those worst affected, through the development of anti retroviral medicines, building of hospitals and provision of education schemes throughout Africa to raise awareness. Educated youth today will ensure a more empowered future generation. If we can work together, we can free our generation and future generations from the threat of AIDS and the terrible damage that it can wreak on the lives of so many people. Your money is the weapon the world has longed for to put an end to this inhumane torture. Give AIDS sufferers a chance at life. Give money. Thank you very much. Word Count 776 ?? ?? ?? ?? ...read more.