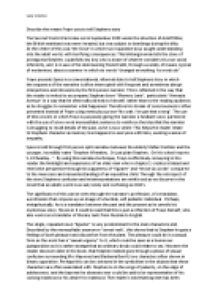 ﻿Lucy Licence Describe the means Frayn uses to tell Stephens story The Second World War broke out in September 1939 under the direction of Adolf Hitler, the British mainland was never invaded, but was subject to bombings during the blitz. At the centre of this was ?the Close? in which two inquisitive boys sought understanding into the adult world, with terrifying consequences. This bildungsroman tells the story of protagonist Stephen, a painfully shy boy who is aware of what he considers his own social inferiority, and is in awe of his domineering friend Keith, through a variety of means, typical of modernism, about a summer in which six words ?changed everything. As words do?. Frayn presents Spies in a conversational, informal style to tell Stephens story in which the sequence of the narrative is often interrupted with frequent and sometimes abrupt interjections and intrusions by the first person narrator. This is reflected in the way that the reader is invited to accompany Stephan down ?Memory Lane?, particularly ?Amnesia Avenue? in a way that he often talks directly to himself, rather than to the reading audience, as he struggles to remember what happened. ...read more.

Described by the monosyllabic oxymoron ?sweet reek?, this shows that to Stephen he gets a feelings of both pleasure and discomfort from the plant. The pleasure could be in a sexual form as the scent has a ?sexual urgency? to it, which could be seen as a humorous juxtaposition as it is rather strange that an ordinary shrub could relate to sex. However the reader discovers later in the book, that Stephen indeed goes through a phase of sexual confusion surrounding Mrs Haywood and Barbarra Berrill, two characters often shown in binary opposition .Perhaps this can be conveyed in the symbolism in the objects that these characters are often associated with. Stephen is on the verge of puberty, on the edge of adolescence, and the bayonet he obsesses over could be said to be representative of his coming manhood or his desire for manhood. The reader is told that bayonet has been sharpened to ?a point like a rapier?. This simile gives a contorted image that the knife is rather phallus shaped, which is depictive of their gender, but also runs with the recurring theme, in the novel, of a struggle for sexual identity. ...read more.

However it could be said that the confusion surrounding privet is purposely humorous as the misinterpretations 'privet', 'private' and 'privey' give the novel a source of comedy. His joke of privet and privies being mixed up is the kind of 'toilet humor' that young boys enjoy and adds an extra dimension to frayn turning the joke on Stephen. Frayn uses humor as a technique of presenting the childish perspective in sophisticated language to highlight their naivety but in a way that doesn't undermine the novels seriousness of its events and concerns particularly the war. The last chapter, of 11-a feature of post modernism literature-, repeats the phrase, from the begining ?everything in the Close was as it was; and everything has changed? and the scent of the privet returns showing connotations that the narrators story, journey, pilgrimage is still unresolved, and no peace of mind has been achieved. On the journey Frayn captures the naivety of childhood, and the strange mix of knowingness and ignorance that characterised children of the Second World War in England. Through Stephens?s epistemological considerations, we learn of his unseemly tale in which the young boy grows up through the events of one memorable summer during those ?years of madness?. ...read more.