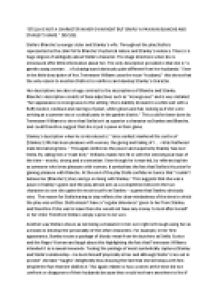 Stella is not a character in her own right but simply a pawn in Blanche and Stanley's game. Discuss.

Transfer-Encoding: chunked ﻿?STELLA IS NOT A CHARACTER IN HER OWN RIGHT BUT SIMPLY A PAWN IN BLANCHE AND STANLEY?S GAME.? DISCUSS. Stella is Blanche?s younger sister and Stanley?s wife. Throughout the play Stella is represented as the calm foil to Blanche?s hysterical nature and Stanley?s violence. There is a huge degree of ambiguity about Stella?s character. The stage directions when she is introduced offer little information about her. The only description provided is that she is ?a gentle young woman ? of a background obviously quite different from her husbands.? Even in the little description of her, Tennessee Williams uses the noun ?husband,? this shows that the only reason to mention Stella is to reinforce and develop Stanley?s character. Her descriptions are also a huge contrast to the descriptions of Blanche and Stanley. Blanche?s description consists of base adjectives such as ?incongruous? and is very detailed: ?her appearance is incongruous to the setting. She is daintily dressed in a white suit with a fluffy bodice, necklace and earrings of pearl, white gloves and hat, looking as if she were arriving at a summer tea or cocktail party in the garden district.? This could?ve been done by Tennessee Williams to show that Stella ...read more.

The morning after the night that Stanley hit Stella, she lies tranquilly in bed when Blanche, wild from a sleepless night, comes in. Stella explains to Blanche that Stanley gets in to violent moods sometimes, but she likes him the way that he is. Although she seemed to repudiate Stanley?s violence the night before, she is clearly aroused by his aggression. Stella is calm, peaceful, and glowing, as though still lit with some of the lurid kitchen lighting of the previous night which suggests a mystical aspect to Stanley and Stella?s violent attraction; she is calmly lying in bed as if she had just taken part in something holy. Though Blanche sees Stanley?s actions as unforgivable, Stella likes it. When Stella tells Blanche about how Stanley broke all the lightbulbs with a shoe on their honeymoon, Blanche is horrified but Stella reassures her that she is ?sort of ?thrilled by it?. The verb thrilled shows that they?re relationship is very much physical and that if the violence didn?t arouse her then she probably wouldn?t be in love with Stanley. After Stella explains all of this to Blanche, she still does not believe Stella and says ?He acts like an animal, has an animal's habits! ...read more.

There is only one reason to argue for her as being a character in her own right and that is in the fact that she is the only one who supports Blanche. Even when Mitch turned against her, Blanche comes to her sister?s defence against her husband again and again. Starting in the beginning of the play when he accuses her of being a ?Swindle? to the end of the play when he reveals everything about her. Stella remains firmly on her sister?s side, refusing to believe these stories even in the face of overwhelming evidence. ?You didn?t know Blanche as a girl,? she argues. ?Nobody, nobody, was tender and trusting as she was.? She is the most loyal and kind character in the play to Blanche, a quality that no other character holds. Therefore she could be a character in her own right. In my opinion Stella is not a character in her own right and Williams uses her to develop other characters, show changes in the scene and justify other characters actions. Stella is the mediating point between Blanche and Stanley. The play can, in more than one way, be interpreted as the conflict between Stanley and Blanche as a territorial battle over who gets Stella?s love and affection. ...read more.