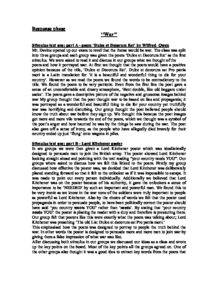 Stimulus and Response analysis: Dramatic and Literary depictions of war

Response phase ''War'' Stimulus text one: part A - poem 'Dulce et Decorum Est' by Wilfred Owen Mr. Devine opened up our exam to revel that the theme would be war. The class was split into three groups and each group was given the poem 'Dulce et Decorum Est' as the first stimulus. We were asked to read it and discuss in our groups what we thought of the poem and how it portrayed war. At first we thought that the poem would have a positive opinion because of the title, 'Dulce et Decorum Est'. Dulce et decorum est Pro patria mori is a Latin translation for 'it is a beautiful and wonderful thing to die for your country'. However as we read the poem we found the words to be contradictory to the title. We found the poem to be very patriotic. Even from the first line the poet gave a sense of an uncomfortable and dreary atmosphere, 'Bent double, like old beggars under sacks'. The poem gave a descriptive picture of the negative and gruesome images behind war My group thought that the poet thought war to be based on lies and propaganda; it was portrayed as a wonderful and beautiful thing to die for your country yet truthfully war was horrifying and disturbing. Our group thought the poet believed people should know the truth about war before they sign up. We thought this because the poet images got more and more vile towards the end of the poem, which we thought was a symbol of the poet's anger and how haunted he was by the things he saw during the war. The poet also gave off a sense of irony, as the people who have allegedly died bravely for their country ended up just 'flung' onto wagons in piles. Stimulus text one: part B - Lord Kitchener poster In are groups we were then given a Lord Kitchener poster which was idealistically designed to persuade men to join the British army. ...read more.

This may seem a silly thing to include but because of the rivalry between the families both lovers had not expected their mothers to care much. At the end of the funeral the narrator explained to the audience how the ring in Admira's hand was now the only symbol left of Admira's and Bosko's love, then the ring dropped to the floor. This symbolised a new beginning for the lovers. For this scene we used the used of costume, prop, lighting, symbol and monolog. Through out the three freeze frames we mainly used narration; the reason for this was we wanted to give a neutral view of the story. The characters froze for a few seconds whilst the narrator narrated and then the actors persisted with the story. We choose to decide the use of drama mediums individually for each scene, this was to ensure that each medium worked as well as it could and was used in the right way. Evaluation phase ''War'' Evaluation of response to stimulus text one: I think that by sharing our ideas as a group and then as a class it meant we were able to develop and explore ideas more. It was interesting to see how although all the groups pick up on similar things we all ended up with very different freeze frames. My group chose what we thought were the 3 key images in the poem and used them as our freeze-frames. We choose to do this because we thought that it expressed best the suffering the poet would have seen and endured. Our first freeze-frame was based on the first line of the poem, 'bent double.' we choose this because we wanted to show how even in the trenches how horrible war was. For this we placed people shooting at the front with a brave look on their face, this was to show how the war was portrayed, but behind them were people bent double and struggling, this was to show how the war really was. ...read more.

From this I learnt that it is much better to use a few mediums of drama well than it is to use as many as possible badly. Task four: freeze-frame two In the second scene I think that the choice of thought tracking was a mistake. It seemed to confuse the audience, and the person stepping out of character to do the thought tracking was unable to get into character quick enough to capture the strong emotions of Admira. I think it would have been better to if the character of Admira had have performed a small monolog instead. However I thought the use of the red light was very successful as it introduced another level of meaning to the scene and thus allowed the characters to develop more. Task four: freeze-frame three We choose to close the final scene with a white light shinning on the two lovers as they lay in their grave. We did this because white symbolizes innocents, purity and peace. I also think that the symbol of the ring worked exceptionally well, as it portrayed to the audience the strength of Admira's and Bosko's love, but it also symbolised hope, future and happiness. Finally I thought that the monolog of Admira's father was important because it demonstrated how some things are more important than others, especially war and hate, no matter how deep they run. It also highlights how stubbornness is sometimes better left, and that it is more important in the long run to put things behind us before they get out of hand. I though this to be a really important message especially on the topic of war. Overview: After receiving the topic of war and the poem I decided to research relevant information. The first thing I found was that the saying 'Dulce et Decorum Est Pro patria mori' was a saying that originated form the Roman poet Horace. It was an old Latin saying meaning it is a beautiful and wonderful thing to die for your country. ...read more.