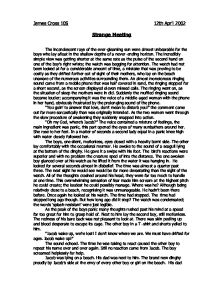 James Cross 10S 12th April 2002 Strange Meeting The incandescent rays of the ever-gleaming sun were almost unbearable for the boys who lay afloat in the shallow depths of a never-ending horizon. The incredibly simple view was getting shorter at the same rate as the pulse of the second hand on one of the boy's right wrists; the watch was begging for attention. The watch had not been looked at for a considerable amount of time, a mistake that was proving to be costly as they drifted further out of sight of their mothers, who lay on the beach unaware of the numerous activities surrounding them. An almost monotonous ringing sound came from a mobile phone that was half covered in sand, the ringing stopped for a short second, as the screen displayed eleven missed calls. The ringing went on, as the situation of sleep the mothers were in did. Suddenly the muffled ringing sound became louder; accompanying it was the voice of a middle-aged woman with the phone in her hand, obviously frustrated by the prolonging sound of the phone. ...read more.

He looked for several seconds almost in disbelief. The time was almost a quarter past three. The next sight he would see would be far more devastating than the sight of the watch. All of the thoughts crashed around his head, they were far too much to handle at one time. This overwhelming sensation of fear made him scream at the highest pitch he could create; the loudest he could possibly manage. Where was he? Although being relatively close to a beach, recognising it was unmanageable. He hadn't been there before. Once again he looked at his watch. The time had stopped. The time had stopped long ago though. But how long ago did it stop? The watch was condensated; the words 'splash-resistant' were just legible. As the peak of the boys panic many thoughts rushed past his mind at a speed far too great for him to grasp hold of. Next to him lay the second boy, still motionless. ...read more.

After fifteen minutes had passed Jacob was winning and proud to be, he was oblivious to his dad's desire for Jacob to win, yet still Jacob played as if his life depended upon it. His mum looked over and smiled at his dad, Jacob too joined in with a brief smile before his struggle to win the battle continued. As the enjoyment and love was at its greatest Jacob felt himself being dragged away from his father, he wanted to stay with him for as long as possible. He lay on a beach yet again. His mother stood above him, his father wasn't to be seen. "Where's dad?" said Jacob. It took time to discover the sad reality of the preceding events. His mother was talking to him; She was desperate to hear from him. Her words meant nothing. He listened but couldn't make any sense of the words. He was in agony from the pain of his now bleeding back that had been exposed to the sun for five hours, but still no noise. "I met dad" ...read more.