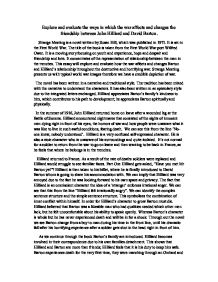 &quot;Strange Meeting&quot; by Susan Hill. Explore and evaluate the ways in which the war affects and changes the friendship between John Hilliard and David Barton.

Explore and evaluate the ways in which the war affects and changes the friendship between John Hilliard and David Barton. Strange Meeting is a novel written by Susan Hill, which was published in 1971. It is set in the First World War. The title of the book is taken from the First World War poet Wilfred Owen. It is a moving story focusing on youth and experience, hope and despair and friendship and love. It concentrates of the representation of relationship between the men in the trenches. This essay will explore and evaluate how the war affects and changes Barton and Hilliard's relationship throughout the destructive and horrifying war. Strange Meeting presents us with typical world war images therefore we have a credible depiction of war. The novel has been written in a narrative and traditional style. The tradition has been mixed with the narrative to understand the characters. It has also been written in an epistolary style due to the integrated letters exchanged. Hilliard appreciates Barton's family's kindness to him, which contributes to his path to development; he appreciates Barton spiritually and physically. In the summer of 1916, John Hilliard returned home on leave after a wounded leg at the Battle of Somme. Hilliard encountered nightmares that consisted of the sights of innocent men dying right in front of his eyes, the horrors of war and how people were unaware what it was like to live in such awful conditions, fearing death. ...read more.

Harris shuts himself into a cellar refusing to come out, as he is so frightened of the war. Hilliard was in charge of the platoon therefore felt it was his duty to deal with the problem. He said to Barton "You'd better stay here' as he wanted to take charge. Hilliard then says to Barton ' I though you might know what to say to him better than I do". Here we can see Hilliard character developing but we still can see the uncertainty as how to approach Harris. Barton managed to get half way up the stairs all of a sudden a shell lands on the building throwing Harris backwards and killing him. This where we see Barton deteriorate, he feels responsible of what happened. Hilliard tried comforting him "If we'd just left him he would of stayed there till tomorrow morning, and we would have to fetch Captain Franklin who would of ordered him out" Barton replied " he'd have been alive Hilliard, he would have been alive". John then stated" When the shell came Id heard you on the stairs just before it... I thought you were dead! We can now fully understand that the war has definitely affected a strong relationship between Hilliard and Barton's as Hilliard in the pass hasn't been able to open up but with Barton he can. ...read more.

Hilliard woke up was in hospital. Lots of letters had been received but one had been on the table for ten days, but he knew he had to open it. It was a letter from David Barton's mother stating that David had been reported missing. The letter also stated that they wish to invite him to their home to visit them when he gets better. Hilliard replies only but telling the truth that he does not know what happened to Barton, but it is highly likely that he has been killed, and also that he will visit when he feels better. Overall we can see that the relationship between John Hilliard and David Barton has grown significantly throughout the novel. Hilliard being an experienced solider has guided Barton through his journey to the war. Barton is inexperienced and doesn't really know the things he will see will haunt him for the rest of his life. Hilliard feels protective over Barton that it is his duty to look after him. This friendship grows into something more serious. The affects of the war defiantly has changed the characters friendship as they went through stages of not talking as Barton was so shocked to what he was seeing, but they both managed to pull through. The war has definitely tested their relationship but it also has caused their relationship to blossom. They played major parts in each other's lives; they could not live without each other but David Barton will always remain in John Hilliard's heart forever. ...read more.