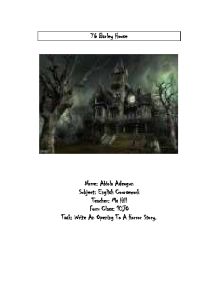 Task: Write An Opening To A Horror Story.

76 Barley House Name: Abiola Adeogun Subject: English Coursework Teacher: Ms Hill Form Class: 10JO Task: Write An Opening To A Horror Story. They told him the house was haunted. They told him the house was strange. Five families had moved in, and never made it out. Alive anyway. He had already survived two days with his family. His second night in his new home, what could possibly happen? A whispered name. The boy stirs in his sleep. A pale, vaporous moon lights the room. Shadows are deep. He twists his head, turning towards the window so that his face becomes a soft mask, unblemished, colourless. But the boy's dream is troubled; beneath his lids, his eyes dart to and fro. The whispered name: 'Daniel....' Its sound is distant. The boy frowns; yet the voice is within his own sleep, a smooth calling inside his dream. His arm loosens from dampened bedclothes, his lips part to a silent murmur. His floating thoughts are being drawn towards consciousness. The protest trapped in his throat emerges as he wakens. And he wonders if he has imagined his own cry as he stares through the glass at the insipid moon. There is, in his heart, a dragging mental distress caused by loss that seems to clot the blood, so that movement in the veins is lazy and wearisome. ...read more.

There is still no sound from their bedroom. No sound in the house at all. Not even the voice. From ahead, at the end of the corridor in which he hesitates, comes a soft glow, a shimmering light. Slowly, step by step, the boy goes to the light. He stops outside the closed door and now there is a sound, a quiet sound. His toes, peeking from beneath his pyjama legs, which are now bathed in the shine from under the door and he studies them. The light is not constant; it flickers gently over the edge of his toes. His hand grasps the door handle and this time there is no cold shock; this time the metal is wet. Or is it merely the wetness of his palm? He has to wipe his hand on the pyjama jacket before he can make the handle turn. He tenses his grip before turning. Then the handle catches and the door is open. He pushes inwards and his face is flushed by the glow. The room displays burning candles: their waxy smell welcomes him. At the furthermost point of the room, resting on a lace-clothed table is a coffin. A small coffin. ...read more.

She needn't drink, but thirsts for him, thirsts for the pain he could give in his final moment, thirsts for his tasty red blood that will fill her mouth and make her feel human for one instant in her outrage. She wants to give in to his visions, bend his neck, run her fingers over his sore tender skin, and then sink her teeth into him and drink form him. For he knows nothing of her months of starvation, restraint, wondering. She has an unclean desire to suck his very soul form him, to make his heart rise in the flesh inside him, to drag from his veins every precious particle of him that still wants to survive. Wanting to slide her hand into his body, breaking the flesh so easily even with her delicate fingers, and close her fingers around his heart, bring it to her lips and suck it, like a fruit until no blood is left in any fibre. Feeding on it till even the colour of blood is out of it. The boy is frozen. His mouth is locked open, lips stretched tight and hard, the scream begun but only breaking loose a moment or two later, a high pitched that cuts through the quietness of the house. His cry reduces, dissolves, and the boy's eyes close while he seeks refuge as his absent-mindedness becomes inflexible... ...read more.