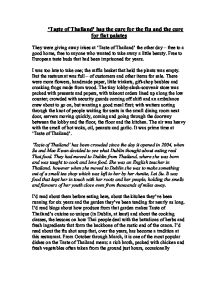 'Taste of Thailand' has the cure for the flu and the cure for flat palates They were giving away irises at 'Taste of Thailand' the other day - free to a good home, free to anyone who wanted to take away a little beauty. Free to European taste buds that had been imprisoned for years. I was too late to take one; the raffia basket that held the plants was empty. But the restaurant was full - of customers and other items for sale. There were more flowers, handmade paper, little trinkets, gift-shop baubles and croaking frogs made from wood. The tiny lobby-slash-souvenir store was packed with presents and papers, with takeout orders lined up along the low counter; crowded with security guards coming off shift and an ambulance crew about to go on, but wanting a good meal first; with waiters sorting through the knot of people waiting for seats in the small dining room next door, servers moving quickly, coming and going through the doorway between the lobby and the floor, the floor and the kitchen. The air was heavy with the smell of hot woks, oil, peanuts and garlic. It was prime time at 'Taste of Thailand'. 'Taste of Thailand' has been crowded since the day it opened in 2004, when Su and Mae Kwan decided to see what Dublin thought about eating real Thai food. ...read more.

While so many restaurants boast about their seasonal, organic, local and market-driven menus, Taste of Thailand is not just seasonal, not just market-driven, but Garden-driven. They decide on some of the compositions of some of the dishes in the morning, while poking around the higgledy-piggledy mess of plants. (According to Mae, they don't plant in rows, they don't organize or separate their stock, and they just grow a little bit of everything wherever they feel like putting it.) Mint looks good? There's going to be a lot of mint on the plates today. How about basil or garlic? It's an interesting way to make a menu. No dish tastes the same from week to week, sometimes day to day. All those chefs out there who brag about going to the farmer's markets and pulling their supplies straight from the fields? Taste of Thailand, with its ever-changing specials and tight menu, its tiny dining room and waiters at the door, is what they are really reaching for. At dinner Saturday, I skipped the 'flu shot' soup because I was hungry for something more substantial and less ... medicinal. So I asked for satay, the satay came with a handmade spicy peanut sauce that was merely okay, and a bright and vinegary cucumber sauce that was fantastic. After that, I had chicken dumplings, stuffed with ground chicken, two kinds of garlic and little jewels of cooked carrot. ...read more.

The broth was fragrant, heavily spiced with fresh garlic and diced ginger root, with tiny flakes of red Thai chillies and bits and pieces of other plants that I couldn't name and which they won't name for strangers. This its their secret recipe; after all, a Thailand home remedy that she states can cure both the flu (if given a few days) and prevent it altogether. The soup was a heavenly juxtaposition of aromas touched with a softness that contrasted with the sharpness or the tactile bite of chilli peppers. The garlic was powerful and savory, the ginger, the planks of carrot that had retained their vegetable sweetness even after cooking in the spice-heavy broth. And the dumplings - similar to the dumplings I had on Saturday night but smaller, their thin skins filled with ground chicken - had soaked up all the flavors of the two dozen or more ingredients, secret and otherwise, and seemed to burst in the mouth like tiny chicken-and-garlic-flavored bombs. It was a great soup - both rustic and controlled at the same time, skillfully balanced and deeply comforting, a perfect showcase for the backyard garden that informs so much of the food. And as for those health claims? Well, I haven't sniffled yet. But should the worst happen and I come down with some kind of flu. Taste of Thailand's garden will be the first place I go looking for relief. I may not get cured, but I know I'll get great food. Word count: 1400 ?? ?? ?? ?? ...read more.