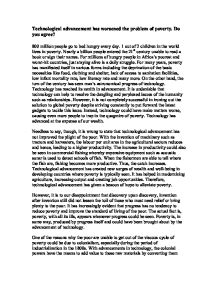 Technological advancement has worsened the problem of poverty. Do you agree?

Technological advancement has worsened the problem of poverty. Do you agree? 800 million people go to bed hungry every day. 1 out of 2 children in the world lives in poverty. Nearly a billion people entered the 21st century unable to read a book or sign their names. For millions of hungry people in Africa's poorest and worst-hit countries, just staying alive is a daily struggle. For many years, poverty has manifested itself in various forms including the deprivation of the basic necessities like food, clothing and shelter, lack of access to sanitation facilities, low infant mortality rate, low literacy rate and many more. On the other hand, the turn of the century has seen man's astronomical progress of technology. Technology has reached its zenith in advancement. It is undeniable that technology can help to resolve the dangling and perplexed issues of the humanity such as relationships. However, it is not completely successful in ironing out the solution to global poverty despite striving constantly to put forward the latest gadgets to tackle this issue. Instead, technology could have make matters worse, causing even more people to trap in the quagmire of poverty. ...read more.

Therefore, many countries which used to be colonial powers were able to achieve developed countries status quickly. Whereas, development was slow in many colonies. Although the colonial powers developed infrastructure such as roads and railways to facilitate the movement of cash crops, other aspects of development such as education and environmental sustainability were not developed. As a result, many colonies remain poor compared to the colonial powers. This disparity of development continued to widen as developed countries continue to develop technology and industrialise further, while the former colonies continued to export low-value raw materials from which they gained little profit. Thus, the condition of poverty is depressed even further with technological advancements. Technological advancements also lead to cumulative causation which eventually results in uneven development. Areas which have better potential to develop will attract investments and labour compared to areas which have less potential to develop. For example, when Singapore began to develop quickly, it attracted workers from periphery countries such as Bangladesh and the Philippines. This results in the periphery countries being drained of labour which hinders their development, leaving the periphery at a disadvantage due to backwash effect. ...read more.

Hence they fall behind in efficiency and competitiveness. Technological advancement forced people out of job and catapulted them into poverty. It is wrong to assume that any population in the world is educated enough to absorb the skills needed to manipulate technology once technology becomes available. In addition, new technology is often too costly that poorer countries could barely afford them. Moreover, they often have underdeveloped infrastructure that is unable to support the operation of sophisticated technology, leading them to unequal access to technology. Technology without necessary infrastructure and skills is nothing other than wastage of resources. It does not help to overcome poverty. Developing countries are not well placed to absorb technologies from abroad and thus lose out. The gulf between the rich and the poor has significantly widened with technological advancements. Technological advancements cannot be entirely blamed for the plight of the poor. Poverty exists due to various causes and technology may not be relevant in some cases. In all, the use of technology has to be coupled with the appropriate skills and knowledge in order to tap on the potential technology can bring for the economy based on various circumstances. Otherwise, it could be a double-edged sword that may be beneficial to mankind but on the other hand, worsen the condition of poverty instead of eradicating it. ...read more.