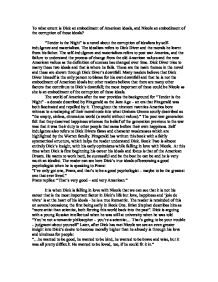 To what extent is Dick an embodiment of American ideals, and Nicole an embodiment of the corruption of those ideals? "Tender is the Night" is a novel about the corruption of idealism by self-indulgence and materialism. The idealism refers to Dick Diver and the morals he learnt from his father. The self-indulgence and materialism refers to post war America, and the failure to understand the process of change from the old American values and the new American values as the definition of success has changed over time. Dick Diver tries to marry these two ideals and that is where he fails. These are the main themes in the novel and these are shown through Dick Diver's downfall. Many readers believe that Dick Diver himself is the only person to blame for his own downfall and that he is not the embodiment of American ideals but other readers believe that there are many other factors that contribute to Dick's downfall; the most important of these could be Nicole as she is an embodiment of the corruption of these ideals. The world of America after the war provides the background for "Tender is the Night" - a decade described by Fitzgerald as the Jazz Age - an era that Fitzgerald was both fascinated and repelled by it. Throughout the nineteen twenties America bore witness to a reshaping of their moral code into what Graham Greene sourly described as "the empty, sinless, chromium world (a world without values)." The post war generation felt that they deserved happiness whereas the belief of the generation previous to the war was that it was their duty to other people that came before their own happiness. ...read more.

This is very ironic as by only doing this to gain moral superiority she looses it instantly. In the early years of Dick and Nicole's marriage he is financially independent. He writes a scientific treatise entitled "Psychology for Psychiatrists" which is very commercially successful; his career is progressing very well, but as the marriage continues he relies on and is controlled by the Warren money. After his first successful book he starts a second. This would have been seen as a great achievement under the ideals of the American Dream but soon his writing is put on hold but is never returned to. It could be said that Dick partly embodies the corrupted ideals of new America through his flaws. Dick indulges himself in pursuing young girls, excessive drinking as well as materialism which undermine his innate idealism. In the South of France Dick confesses to Mrs. Speers that he is in love with Rosemary: "'I'm in love with Rosemary,'... 'It's a kind of self-indulgence saying that to you.'" He later ominously describes her as forms of poisons: "the blinding belladonna... the mandragora that imposes harmony." Fitzgerald's use of sinister metaphors to describe Rosemary forewarns the reader of the part Rosemary is to play in Dick's downfall. Dick starts to realize that she is epitomy of woman hood, of evil and full of dark omens. The word "all" implies that she has absolute power over him. Brian Stephan states that "It is Rosemary, after all, who is the catalyst that hastens the dissolution of the Divers' dream world" and therefore also Dick's world. ...read more.

Dick can be thought of as true to the American ideals. The original American dream was to gain success but soon this became linked with money. Dick once succeeded in the old American dream by producing a book that although was told was a lightweight, he knew that there was a great need for this type of book in his field and was very successful. Nicole saps his energy and love of life from him. The Warren money strips Dick of all his values and also American ideals and abandons his ambition just like Abe North and turns to drink. Nicole is taking part in the changing process from Ole American values to new lavishly spending and having an adventure whereas Dick is on the cusp between the two. Still they purveyor in making people happy he is put in a different league to all of the other characters so instead of disliking Dick for his faults we sympathize and understand them. Fitzgerald, when writing "Tender is the Night" wanted to show a man who is a natural idealist, a spoiled priest, giving in for various causes to the ideas of the haute Bargoise and to his rise to the top of the social world losing his idealism, his talent and turning to drink and dissipation. Fitzgerald says himself "The hero is a man like myself." A gentleman struggling to come to terms not only with his wife's illness but also the new world that is developing with new morals around him and this is how I believe Dick is portrayed- an embodiment of American ideals corrupted by the people and world around him. ...read more.