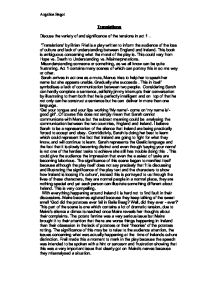 Discuss the variety of and significance of the tensions in act 1.

‘Translations’ by Brian Friel is a play written to inform the audience of the loss of culture and lack of understanding between England and Ireland. This book is ambiguous concerning what the moral of the play is. This could vary from Hope vs. Death to Understanding vs. Misinterpretations.

Misunderstanding someone or something, as we all know can be quite frustrating. Act 1 contains many scenes of which can portray this in some way or other.

Sarah arrives in act one as a mute, Manus tries to help her to speak her name but she appears unable. Gradually she succeeds. This in itself symbolises a lack of communication between two people. Considering Sarah can hardly complete a sentence, selfishly jimmy interrupts their conversation by illustrating to them both that he is perfectly intelligent and on top of that he not only can he construct a sentence but he can deliver in more than one language.

‘Get your tongue and your lips working ‘My name’- come on ‘my name is’- good girl’. Of course this does not simply mean that Sarah cannot communicate with Manus but the subtext meaning could be analysing the communication between the two countries, England and Ireland. I believe Sarah to be a representation of the silence that Ireland are being practically forced to accept and obey. Contridictivly, Sarah is doing her best to learn which could represent the fact that Ireland are going to fight for what they know, and will continue to learn. Sarah represents the Gaelic language and the fact that it is slowly becoming distinct and even though ‘saying your name’ is not one of the hardest tasks to achieve she still has trouble doing this. This could give the audience the impression that even the easiest of tasks are becoming laborious. The significance of this scene began to manifest itself because although the play itself does not say precisely that ‘it is discussing and illustrating the significance of the play text and the characters to show how Ireland is loosing it’s culture’, instead this is portrayed to us through the lives of these characters, they are normal people in a normal place, they are nothing special and yet each person can illustrate something different about Ireland. This is very compelling.

With everything happening around Ireland it is hard not to find fault in their discussions. Maire becomes agitated because they keep talking of the sweet smell ‘God did the potatoes ever fail in Baile Beag? Well, did they ever- ever?’ This part of the scene is one which contains a lot of dramatic tension, due to Maire’s silence a climax is reached once Maire reveals her thoughts about their complaints. The potato famine was a very serious issue but Maire brought it to their attention that there are worse things happening in Ireland than their obsession in the lack of potatoes or their ‘theories’ of the potatoes rotting. The significance of this may be to raise to the audience attention, the issues concerning what was actually happening at the time of Irelands culture distinction. Freil made this a moment to mark in the play because the speech was intended to be spoken with a hint or sarcasm and frustration showing that this was a very important issue that clearly got on Maire’s nerves because they misanalysed a situation.

When Owen enters tension is brought with him. He is a translator for the British Soldiers that are trying to change the place names of Ireland into the kings English. Knowing that someone from you own country and in some situations your own family, is helping another country to destroy your language and take away your history can indeed be irritating causing a build of tension. Owen is an interesting character and seems bemused by the fact that the people of Ireland are still speaking Gaelic. ‘My job is to translate the quaint, archaic tongue you people persist in speaking into the king’s good English’. Freil has made this a significant moment in the play. The audience has been introduced to a character who in someway represents ‘the object of demise’.

Also as we come to the end of the scene Owen and Manus are discussing the translation that Owens has just given to the rest of the hedge-school concerning why the soldiers were in Baile Beag.

‘And what’s Yolland’s function? What’s ‘incorrect’ about the place names we have here?’

‘Nothing at all. They’re just going to be standardised.’

‘You mean changed into English?’

‘Where there’s ambiguity, they’ll be anglicised’

This is also significant and may be the most important part of the act 1.

The two brothers represent the two countries, both with different views and both with different perspectives of how things should be, but obviously not so different. Manus is the character representing Ireland, he is intelligent and passionate about his culture, alike others he doesn’t understand why the English are trying to anglicise Ireland. Owen is the character representing England; he is also intelligent and passionate about his work. Owen, originally from Ireland represents the ‘English hand’, because he is helping the English he is becoming part of the reason why Ireland is being able to be anglicised. The argument between Manus and Owen was about misinterpretation and understanding, showing that this argument represents something more than a fight between two brothers.

In conclusion there are many tensions of scene one that are mainly based on communication and misinterpretation but these themes are largely based through out the whole book. England and Ireland are represented by each character as each of the characters make up a little piece of Ireland. Sarah represents communication and the distinction of the Gaelic language. Jimmy represents intelligence and passion. Manus represents understanding and culture, Hugh represents fire and Knowledge and Maire represents Love. The tensions in act one were very significant, they gave the audience an insight to Ireland and the Irish people and also what the Gaelic language really means to them, these tensions arose thoughts and events that happened in Ireland and by making them known to us through arguments or non-agreeable discussions showed the audience that they were important.