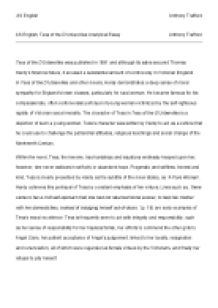 Tess of the D'Urbervilles Analytical Essay

﻿AS English Anthony Trafford ________________ AS English, Tess of the D?Urbervilles Analytical Essay Anthony Trafford ________________ Tess of the D?Urbervilles was published in 1891 and although its sales secured Thomas Hardy?s financial future, it aroused a substantial amount of controversy in Victorian England. In Tess of the D?Urbervilles and other novels, Hardy demonstrates a deep sense of moral sympathy for England?s lower classes, particularly for rural woman. He became famous for his compassionate, often controversial portrayal of young woman victimized by the self-righteous rigidity of Victorian social morality. The character of Tess in Tess of the D?Urbervilles is a depiction of such a young woman. Tess?s character was written by Hardy to act as a vehicle that he could use to challenge the patriarchal attitudes, religious teachings and social change of the Nineteenth Century. Within the novel, Tess, the heroine, has hardships and injustices endlessly heaped upon her, however, she never wallows in self-pity or abandons hope. Pragmatic and selfless, honest and kind, Tess is clearly presented by Hardy as the subtitle of the novel states, as ?A Pure Woman?. Hardy achieves this portrayal of Tess by constant emphasis of her virtues. ...read more.

It is this aspect of the visit to the D'Urbervilles that disturbs Tess most, highlighting her particular sexual innocence. Tess is unaware of her own sexuality and thus cannot perceive the danger that Alec presents to her. Hardy turns the story of man?s fall from god?s grace on its head by presenting the man as the tempter and seducer rather than the women, appearing to confront the Victorian idea that women are dangerous and the ones needed to be controlled. Tess?s physicality is referred to so frequently in the novel that it?s hard to not think of her attractiveness as her defining characteristic. Some characters in the novel aren?t able to see past her good looks. Again referring to Chapter V, The scene in which Tess first meets Alec, we witness the first instance of this: ?She had an attribute which amounted to a disadvantage just now; and it was this that caused Alec D'Urberville's eyes to rivet themselves upon her. It was a luxuriance of aspect, a fullness of growth, which made her appear more of a woman than she really was. She had inherited the feature from her mother without the quality it denoted. ...read more.

40). Hardy also frequently associates Tess with nature, he writes lines such as ?a field-woman is a portion of the field? she had somehow? assimilated herself with it? (p. 104) to show this. Tess is almost an incarnation of nature, and certainly a representative of an older order which has somehow placed itself within her. The connection Tess has with nature is also used by Hardy as a tool for him to present Tess other characteristics as natural therefore good. Tess undergoes so much hardship and bears such great burdens, however she has one major weakness throughout the novel. Her greatest weakness is her family, particularly her brothers and sisters, and it?s this weakness that Alec exploits to great effect. Her journey to The Slopes, at the beginning of the novel, and her subsequent return to Alec near the novel?s end, is all predicated on her willingness to undergo great pains to make her family?s life better. Alec promises financial aid to the Durbeyfield family several times, to which Tess cannot object. He has ulterior motives, however: to subdue Tess and make her his own. Thus, Hardy paints a grand portrait of a well-rounded character in Tess Durbeyfield, whilst making the point that this world punishes virtue and rewards sin. ...read more.