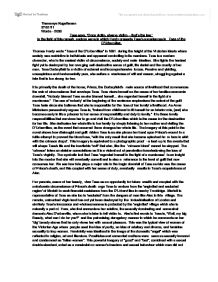 Tess says, Once victim, always victim thats the law. In the light of this remark, explore ways in which Hardy presents Tesss experiences in Tess of the DUrbervilles.

Tess says, 'Once victim, always victim - that's the law.' In the light of this remark, explore ways in which Hardy presents Tess's experiences in Tess of the D'Urbervilles. Thomas Hardy wrote "Tess of the D'Urbervilles" in 1891 during the height of the Victorian ideals where society was restrictive to individuals and appeared controlling to its members. Tess is a modern character, who is the easiest victim of circumstance, society and male idealism. She fights the hardest fight yet is destroyed by her ravaging self-destructive sense of guilt, life denial and the cruelty of two men. Tess Durbeyfield is a victim of external and incomprehensive forces. Passive and yielding, unsuspicious and fundamentally pure, she suffers a weakness of will and reason, struggling against a fate that is too strong for her. It is primarily the death of the horse, Prince, the Durbeyfield's main source of livelihood that commences the web of circumstance that envelops Tess. Tess views herself as the cause of her families economic downfall, "Nobody blamed Tess as she blamed herself... she regarded herself in the light of a murderess." The use of 'nobody' at the beginning of the sentence emphasises the extent of the guilt Tess feels since she believes that she is responsible for the loss of her family's livelihood. ...read more.

Hardy portrays Tess as having morals and convictions and even more radically, a mind of her own, which middle class people of that time didn't think women possessed or deserved. These fruits of love are an indication of Alec's lust and sexual desire for Tess as he preys upon her purity and rural innocence and we see how she is victimised by male desires although she still continues to act accordingly to what she believes. Tess unwillingly becomes a victim to Alec's inhumane, violent and aggressive sexual advances. Alec, always the master of opportunities, takes advantage of her whilst alone in the woods and rapes her. Tess's agony is seen through, "But where was Tess's guardian angel? Where was Providence," and the rhetorical questions carries an accusatory tone passing the blame of Tess's corruption onto someone else and still trying to maintain her purity. The use of 'guardian angel' shows how even religion is not in favour of Tess and God is not answering her call; although she is so good and pure that she should have been protected from the crueller side of human nature as Alec seizes upon her vulnerability. After this sexual violation and corruption of innocence, Tess flees home and although she has escaped the trap of the sexually rapacious Alec for the time being, her circumstance is similar to that of a wounded animal - her blood of innocence has been released. ...read more.

On her way to her miserable existence in Flintcomb Ash, Tess spends the night huddled in a wood and emerges in the morning to find a number of dead and dying pheasants, "their rich plumage dabbled with blood." Describing how Tess, "killed the birds tenderly," Hardy returns to his condemnation of the 'arbitrary law of society' which has destroyed Tess's chance of happiness. Tess reprimands herself for feeling self-pity; 'I be not mangled, and I be not bleeding' - and although she is not physically marred by the events that have so irrevocably altered her life, emotionally and spiritually she is exhausted. Continually she is victimised by the men in her life and their desires and actions solely benefit them but drive Tess further into deeper tragedy. The potent tragedy of Tess's life is that her decisions have always been made with good and pure intentions but have resulted in damaging consequences. Tess is undoubtedly a victim as misery punctuates her life. She is a victim of circumstance in that her individuality makes little difference to her fate, she is a victim of society in the sense that she is a scapegoat of narrow - mindedness and she is a victim of male ideology on the grounds that her powers of will and reason are undermined by her sensuality. Tess herself sums up her own blighted life best; 'Once a victim, always a victim - that's the law!' ?? ?? ?? ?? Thamanya Kugathasan 27/01/11 Words - 2050 ...read more.

While this essay contains lots of interesting information it lacks focus and clarity. It could be improved in the following ways:
- by making a clear plan before beginning to write, in which each paragraph directly tackles the question set.
- by including a topic sentence at the beginning of each paragraph which relates back to the question and gives the reader a clear sense of how the argument of the essay is developing.
- by quoting from the text rather than the critics, and by ensuring that all quotations from secondary sources are acknowledged, and fully understood!