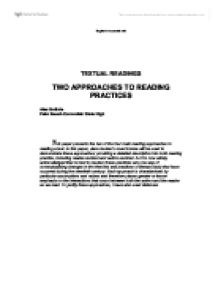 English In Australia 133 TEXTUAL READINGS TWO APPROACHES TO READING PRACTICES Alex Guthrie Palm Beach-Currumbin State High This paper presents the two of the four main reading approaches to reading a text. In this paper, Jane Austen's novel Emma will be used to demonstrate these approaches; providing a detailed description into both reading practice, including reader-centred and author-centred. As it is now widely acknowledged that no text is neutral, these practices are one way of conceptualising changes in the theories and practices of literary study that have occurred during the twentieth century. Each approach is characterised by particular assumptions and values and therefore places greater or lesser emphasis on the interactions that occur between both the author and the reader as we read. To justify these approaches, I have also used defenses. Reader-Centred Approach Since its release in the early years of the nineteenth century, the novel Emma has never ceased to impress and intrigue. While being criticised for its lack of action and development, the novel, I found, provides the reader with a remarkably accurate and surprisingly hilarious portrayal of life in the upper middle class during the Victorian period. With the ability to one minute have me ready to pull out my hair and the next be in hysterics as Jane Austen repeatedly pokes fun at the characters and their unanticipated antics and imperfections, this book is a work of art. Events are miscalculated, actions are misinterpreted and emotions are toiled with, but as with many of Jane's novels, a neatly tied (even teary) ending is produced and all that should live happily ever after do. In the end, what I had presumed to be both dull and strenuous turned out quite the opposite, and my immense appreciation for the novel, as you will no-doubt discover, clearly demonstrate this. After reluctantly sitting through the movie Pride and Prejudice, my preconceptions of Jane Austen's work, as I gazed down at page one of Emma, were of an exceptionally low standard. ...read more.

In this theory, a psychological perspective is apparent. As I have learned, the five theoretical perspectives are interrelated, so that a mature reader-centered response to a text will not rely on a single perspective exclusively (Beach, 1993). However, I discovered that in practice, it is entirely probable that at any one instance during the reading of a text, one or two perspectives might predominate. I brought my knowledge, experiences, habits, expectations, values and beliefs to the text and, as a result, in my reading, an experiential perspective was adopted more often that others. Furthermore, my understanding of the concept of invited reading enabled me to recognise that multiple readings and meanings can be generated from the same text because of what each reader brings to that text (Senior Extension English Literature, P.17); therefore allowing me to read the text alternatively (verifying that I am far from the implied reader), embracing 'simultaneously a willingness to suspect and a willingness to listen to an invited reading' (Ricoeur, 1991). Author-Centered Approach Wealthy, pretty and self-satisfied, Emma Woodhouse is quite possibly Jane Austen's most complete heroine. Indulging herself with meddlesome and unsuccessful attempts at matchmaking, Emma struggles to shed her vanity and fear of confronting her won feelings. While both of which cause her to misinterpret and misunderstand those around her, Emma's persistent interference has disastrous effects. Though Austen herself described Emma as "a heroine whom know one but myself will much like" (Website 3), she bestowed her creation with enough charm to see her through her most egregious behavior, and the saving grace of being able to learn from her mistakes; thus resulting in a neatly tied and most pleasant ending. On the surface, this novel is a romantic comedy of manners, examining the behavior of men and women of a single social class, exposing each characters frailties and intern, emphasizing the notion that nobody is perfect. ...read more.

To properly analyse the text, it is essential to have an understanding of the world in which the author lived, as the author and thus the text itself have been shaped by personal events, treasured experiences and individual values. In my description of Jane Austen's life, I made connections between her life and the novel Emma, deliberately using questions instead of statements as a means of stressing that my reading is not necessarily the implied reading. In a more modern approach, it is not possible to "read off the author's life and times directly from the text" (draft syllabus, 5.3.2, P.11). Hence, when identifying the fundamental ideals, messages and reader positioning embedded in the text, biographical or autobiographical information must also be treated as a text open to interpretation. In a historical response, the reader's role was to identify the author's intended message about the world. Furthermore, the text was esteemed on its capability to establish an "intimate relationship with the author's mind" (draft syllabus, 5.3.2, P.10). In am more contemporary approach however; the concept of the implied author has challenged this notion of "authorial presence" (draft syllabus, 5.3.2, P.10). As it is now widely acknowledged that the implied author may be quite different from the actual writer, following my interpretation of the novel, I firmly reiterated, "It is problematic to assume that these [interpretations] are accurate." In my author-centred reading of Emma, I came to realise that while Jane Austen brought her own understanding and interpretation of the world to the text, I can only speculate as to what actual influences affected her writing of the novel. I emphasized that my reading of Emma is merely one among innumerable other legitimate interpretations, applying Foucault's author-function of classification as an instrument of demonstrating this. I contested the classification of Emma in the original cannon and generated my own theory of Jane's true intentions and possible hidden agenda. Finally, I challenged the old view that meanings are unchanging, using a modern day example to reinforce that meanings are constantly evolving with time. ...read more.