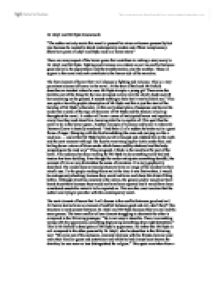 The author not only wrote this novel to present his views on human personality but also because he wanted to shock contemporary readers out of their complacency. Show how parts of Jekyll and Hyde read as a horror story

Dr Jekyll and Mr Hyde Coursework "The author not only wrote this novel to present his views on human personality but also because he wanted to shock contemporary readers out of their complacency. Show how parts of Jekyll and Hyde read as a horror story." There are many aspect of the horror genre that contribute to making a story scary in Dr Jekyll and Mr Hyde. Fighting and violence are evident as well as conflict between good and evil; the supernatural and the transformation; also the weather. These all appear in the novel and each contribute to the horror side of the narrative. The first element of horror that I will discuss is fighting and violence. This is a very prominent element of horror in the novel. At the start of the book Mr Enfield describes an incident where he sees Mr Hyde trample a young girl "then came the horrible part of the thing for the man trampled calmly over the child's body and left her screaming on the ground. It sounds nothing to hear but it was hellish to see." This was quite a horrific graphic description of Mr Hyde and this is just the start of the build up of Mr Hyde's character. ...read more.

All horror stories have an element of conflict between good and evil; don't they? This structure is most present between Dr Jekyll and Mr Hyde because they are one and the same person. The inner conflict of one element struggling to dominate the other is compared in the following passages: "He is not easy to describe. There is something wrong with his appearance; something displeasing something down right detestable." This is Mr Enfield's description of Mr Hyde's appearance. He infers that Mr Hyde is evil compared to his other personality Dr Jekyll, who he describes in the following way: "He came out of his seclusion, renewed relations with his friends, became once more their familiar guest and entertainer and whilst he had always been known for charities, he was now no less distinguished for religion." This quote was taken from a passage when Mr Hyde turns back into Dr Jekyll. From this you can see that the two elements of good and evil are constantly battling over custody of the body. This is also quite scary because it shows the man as an unknown quantity and you never really know who he is. You would never know which element would be dominating his personality from one day to the next. ...read more.

Almost every horror novel, film or play uses weather to cause tension and atmosphere, the most obvious example being a thunder storm or thick fog. Because this is so common place in horror novels when the narrative describes is we instantly feel anxious, knowing that something bad is about to occur. In gothic horror novels you notice that when someone gets murdered it's never on a sunny day or a starry night: "I was coming home from some place at the end of the world, about three o'clock of a black winter morning." "It was a wild cold, seasonable night of March." The use of weather is a subtle way of setting the scene. These quotes were taken from passages following which, some horrific incident takes place. So, in conclusion, I would say that Dr Jekyll and Mr Hyde reads as a horror novel with the effective use of all of these elements to contribute to the horror of the person of Dr Jekyll and Mr Hyde. The author wanted to shock his reader and he succeeded, even to the present day. Although it uses some classic elements of horror, like the weather and transformations, it was also original and broadens the horror genre for other horror writers. Josh currer ...read more.