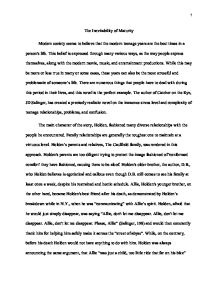 The author of Catcher on the Rye, JD Salinger, has created a precisely realistic novel on the immense stress level and complexity of teenage relationships, problems, and confusion.

The Inevitability of Maturity

Modern society seems to believe that the modern teenage years are the best times in a person's life. This belief is expressed through many various ways, as the way people express themselves, along with the modern movie, music, and entertainment productions. While this may be more or less true in many or some cases, these years can also be the most stressful and problematic of someone’s life. There are numerous things that people have to deal with during this period in their lives, and this novel is the perfect example. The author of Catcher on the Rye, JD Salinger, has created a precisely realistic novel on the immense stress level and complexity of teenage relationships, problems, and confusion.

The main character of the story, Holden, fashioned many diverse relationships with the people he encountered. Family relationships are generally the toughest one to maintain at a virtuous level. Holden’s parents and relatives, The Caulfield family, was rendered in this approach. Holden's parents are too diligent trying to protect the image fashioned of 'conformed comfort' they have fashioned, causing them to be aloof. Holden's older brother, the author, D.B., who Holden believes is egotistical and callous even though D.B. still comes to see his family at least once a week, despite his restrained and hectic schedule. Allie, Holden's younger brother, on the other hand, became Holden's best friend after his death, as demonstrated by Holden’s breakdown while in N.Y., when he was “communicating” with Allie’s spirit. Holden, afraid that he would just simply disappear, was saying “Allie, don't let me disappear. Allie, don't let me disappear. Allie, don't let me disappear. Please, Allie” (Salinger, 198) and would then constantly thank him for helping him safely make it across the “street of abyss”. While, on the contrary, before his death Holden would not have anything to do with him. Holden was always announcing the same argument, that Allie “was just a child, too little ride that far on his bike” (Irving, 84) in its many various forms and shapes. Until Allie’s death, Holden only required Allie to epitomize that Holden was superior, to have Allie look up to him. But after Allies death Holden had to make another conduit for attainment that same knowledge and approval from Allie, therefore creating the “imaginary” Allie that can be assumed had many conversations and happenings with Holden.

Holden, while attending many of the schools he had gone to, was introduced to many people he never had any close bonds with. For many people creating intimate relations with another person is difficult to accomplish for many reasons. Salinger saw this in the world and placed Holden in that same scenario. Girls were even a problem in Holden's life. Instead of ever developing any kind of intimate or sexual relations with them, he just focused all of that energy towards his younger sister. "Holden continually obsessed with women, but he rarely did anything about it" (Bennett 130). One night when Holden was in New York he even ordered a hooker up to his room, but once she arrived, they only sat and talked. It seemed as if Holden was not only having problems with women, but if you looked closely the problem lie within him not being able to trust others. While attending Elkton School, he roomed with a guy named Harrison Macklin, and no matter what he was like; Holden was unable to share any feelings or emotions with him.

Other than parents, teachers are the people who mold us and sculpt our lives into something amazing or at least attempt to. Mr. Antolini, one of Holden's former teachers, was added to the plot of the story to create something that was missing in Holden's life. The boy even goes as far as to seek out Mr. Antolini because he hopes that the gentile teacher, who represents Holden's substitute father, will save him before he has fallen over the edge of childhood in becoming a man. "Antolini represents Holden's last chance to find a catcher father for Holden" (Baumbach 134).

The author puts the main character in situations in which he encounters many problems in his life journey which some seem to be self-inflicted due to his tendency of judging what is seen. School was not a major priority in the mind of that character. Just as people in today's society, school was taken too lightly; this exact dilemma is the reasoning for Holden's expulsions. While attending Pency Prep for boys, Holden was only successful in passing one out of four of his classes. ."..All you do is learn enough to be smart enough to be able to buy a Goddamn Cadillac...and all you ever do is talk about girls, liquor, and sex in your dirty little cliques" (Salinger 131). This was the perspective of boys' school in the eyes of Holden. Today many people just like Holden, look at school for what it is and not for what it can lead to. They seem to look at things with only one eye open.

A large dilemma in society today is that within families there are many problems, most of which have been created by the individuals of households. The Caulfield family has been separated around the country, which caused many problems in the life of Holden. The author, JD Salenger, has made the family to become distant and far apart. "Phoebe is almost dead due to the lack of love"(Bennett 131) The family has lost all bonding ties and this is why Holden is in search of a new family and looks towards Mr. Antoili for his help.

People are often judged upon first impressions, which usually stay with them throughout their lives. This is the problem that Holden has towards others. It never seems that he will spend more then two minutes to get to know someone. He only believes that the world is full of phonies and followers and that no one is really who they are inside. Making friends is a difficult task for Holden due to the fact that he will never share his opinions and that he despises the world. "When Holden traveled to New York for a fencing tournament he accidentally forgot the equipment on the subway causing the school and team mates to be furious" (Salinger 3).

To Holden the world is composed off phonies, and he believes this because he will not take the time to get to know something and just makes assumptions on what he sees. People in general have a bad tendency to do what Holden does to everyone. Take girls for instance, Holden will just look at them and assume who they are, where they come from and what they will turn out to be like when they grow up. "Some girls look swell and nice and other girls who look like bitches" (Salinger 123) He assumes that because they are girls they will end up marrying dopey men. Individuals in today's society also come to the conclusion that lawyers seem to be liars and fakes. "They make a lot of dough and play golf and play bridge and buy cars and drink martinis and look like a hot-shot"(Mitchell 131). Holden has also come to this conclusion of what lawyers and other people seem to be like.

Life seems to be all about what others think and how you preserve yourself. Many people put them selves down in life or have no confidence and walk around dazed and confused. The main character is portrayed in this manor. "He believes that he is in a hole, trapped by the games of phoniness that society requires its citizens to play." (Mitchell 133) All that the author makes Holden out to be is a lost boy who just wants to simply leave this corrupted Eden. There could be many explanations to describe the reason that he feels this way but they mainly revolve around the traumatic events in his childhood. The death of Allie, and the death of a fellow schoolmate could be these reasoning. Salinger created a very realistic and empathetic novel. Holden, the teenage boy he created represents all the teenagers in the world and their problems, relationships, and confusion life often brings.