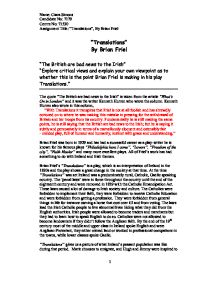 &quot;The British are bad news to the Irish&quot; - &quot;Explore critical views and explain your own viewpoint as to whether this is the point Brian Friel is making in his play Translations.&quot;

"Translations" By Brian Friel "The British are bad news to the Irish" "Explore critical views and explain your own viewpoint as to whether this is the point Brian Friel is making in his play Translations." The quote "The British are bad news to the Irish" is taken from the article "What's On in London" and it was the writer Kenneth Hurren who wrote the column. Kenneth Hurren also wrote in this column, "With Translations it transpires that Friel is not at all foolish and has shrewdly cottoned on to where he was making this mistake in pressing for the withdrawal of Britain and her troops from his country. Fundamentally he is still making the same points, he is still saying that the British are bad news to the Irish; but he is saying it subtly and persuasively in terms of a marvellously eloquent and ostensibly fair - minded play, full of humour and humanity, instinct with grace and understanding." Brian Friel was born in 1929 and has had a successful career as a play-writer he is known for his famous plays "Philadelphia here I come", "Lovers", "Freedom of the city", "Faith Healer" and many more excellent plays. All of Friel's work has had something to do with Ireland and Irish themes. Brian Friel's "Translations" is a play, which is an interpretation of Ireland in the 1830s and the play shows a great change in the society at that time. At the time "Translations" was set Ireland was a predominately rural, Catholic, Gaelic speaking country. The 'penal laws' were in force throughout the country until the end of the eighteenth century and were removed in 1829 with the Catholic Emancipation Act. These laws caused a lot of damage to Irish society and culture. The Catholics were forbidden to implement their faith, they were forbidden to receive Catholic Education and were forbidden from getting a profession. ...read more.

This happens in Act one and in my opinion Owen sunk low as he was making what the English were going to do seem simpler than what it was. Lancey was saying that the taxes were going to rise and Owen was saying that the taxes would be lowered keeping the hedge school pupils happy. The only three in the hedge school that could speak English and Irish were Manus, Owen and Hugh. Manus, Owen's brother confronts him only after Lancey has finished speaking. Manus is not happy with his brother Owen for cheating the fellow villagers like he did. "Manus What sort of translating was that Owen? Owen Did I make a mess of it? Manus You weren't saying what Lancey was saying!" When Lancey bursts into the hedge school in act 3 page 79 do we see what the English resort to if there's any form of resistance. The British are going to evict people off their land and homes, destroy fences, ditches, crops, haystacks everything insight and they are going to persist in this until they find their missing trooper. The specific name for these actions is called scorched earth policy, which means they are going to destroy everything they can find. In act two we see Owen the Irish translator and Yolland the British trooper starting to translate the place names of the places around Baile Beag. They are doing this because the English need to know every inch of Ireland so they can see what they are taking over and it would be impossible for them to do this if all of the maps they have are in Irish. Lancey stated in Act 1 that one reason for the mapping is so that, "the military authorities will be well equipped with the up-to-date and accurate information on every corner of this part of the Empire." So Owen's job is to translate the place names into English and to translate for the people in Baile beag to make the British soldiers job easier. ...read more.

into speaking fluent English and speaking no Irish and how England influenced the Irish population to drop their native Irish culture to lead full English lives. I feel that reading Friel's interpretation on life in the 1833s I have more knowledge on why today we live in Ireland and we say we are Irish, but we speak fluent English. I think that the circumstances in which we lost our native language and background is quite sad and infuriating. I think Friel produced this play not for people to sit down and enjoy it but for people to be walking away from it confused. I am sure many of the audiences tried to push the aspects that were raised throughout the play to the back of their minds. I feel that the British are definitely bad news to the Irish. Our country can't be the same after our culture and language was so quickly given away. The affects of the English will never leave this country as they have imprinted their presence in a way that can't be erased easily. After reading "Translations" I was full of emotion for the Irish people at the time the play was set and their innocent acceptance of English. I felt pity towards them in the sense that they were losing their language. They had no idea 170 years after the play was set we are still talking English as our first language and Irish isn't spoken fluently in many parts of Ireland. With England colonising Ireland, which lead to the loss of the Irish language, still has an effect on Irish people today. It's hard for some people to say that their nationality is Irish and the language they speak is English. I think that in order to address the problems faced due to English being our first language, the Irish language should be offered more to people in Ireland. No matter what happens the English language will be more in use in Ireland than the Irish language. ...read more.