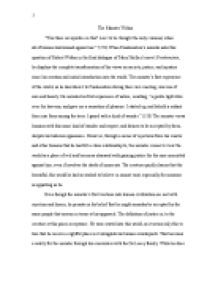 The creatures shift in attitudes regarding society, justice, and injustice is finalized in the final chapter of Shelleys &quot;Frankenstein&quot;, but it had been occurring since he very first opened his eyes.

﻿The Monster Within ?Was there no injustice in this? Am I to be thought the only criminal, when all of human kind sinned against me? ?(273) When Frankenstein?s monster asks this question of Robert Walton in the final dialogue of Mary Shelley?s novel Frankenstein, he displays the complete transformation of his views on society, justice, and injustice since his creation and initial introduction into the world. The monster?s first experience of the world, as he describes it to Frankenstein during their cave meeting, was one of awe and beauty. He narrates his first experience of nature, recalling, ?a gentle light stole over the heavens, and gave me a sensation of pleasure. I started up, and beheld a radiant form rise from among the trees. I gazed with a kind of wonder.? (118) The monster views humans with this same kind of wonder and respect, and desires to be accepted by them, despite his hideous appearance. However, through a series of rejections from his creator and other humans that he has felt a close relationship to, the monster comes to view the world as a place of evil and becomes obsessed with gaining justice for the sins committed against him, even if involves the death of innocents. ...read more.

Frankenstein?s monster comes to an even greater understanding of humanity and justice through his readings of the books he found one day while scavenging for food. Milton?s Paradise Lost is particularly influential to the creature; the creature thinks of this work as nonfiction, and compares himself to Satan, ?wretched, helpless, and alone.? The creature tells Frankenstein that the books ?produced in me an infinity of new images and feelings, that sometimes raised me to ecstasy, but more frequently sunk me into the lowest dejection? (151). While these books teach the creature about the failure of society and the lack of justice in the world, the rejection by the De Laceys once he finally reveals himself to the family is his first real example of this. Although this was not his first time being rejected from society, it is by far the most traumatizing, forever changing his views on the supposed goodness of humanity. The other major event that forces Frankenstein?s monster to reconsider his views of justice and injustice occurs when, after realizing that he will never be a part of human society, the monster begs his creator to make him a female, a partner ...read more.

Now that he had completed his transformation from ?fallen angel? to the ?malignant devil,? the creature realizes that he has no other choice to but let death overcome him as well. The creature?s shift in attitudes regarding society, justice, and injustice is finalized in the final chapter of Shelley?s novel, but it had been occurring since he very first opened his eyes. The monster?s admiration for society turns to abhorrence at the crimes that it had committed against him. Justice, which the monster once believed could be obtained by finding his place in the world, becomes defined by his utter need for revenge. And the greatest injustice, in the monster?s eyes, is the disdain with which he was treated by humanity, including his own creator. If he had not been a monster before, he surely was then. James A. Baldwin once said, ?The most dangerous creation of any society is the man who has nothing to lose.? This is true in the case of Frankenstein?s monster. Once he loses any chance of anything other than a life of solitude, he comes the despicable and destructive monster that he had always been viewed as. ...read more.