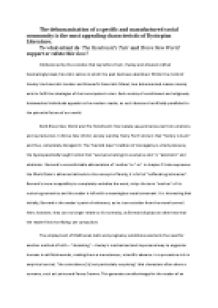 The dehumanisation of a specific and manufactured social community is the most appealing characteristic of Dystopian Literature. To what extent do The Handmaids Tale and Brave New World support or refute this view?

﻿The dehumanisation of a specific and manufactured social community is the most appealing characteristic of Dystopian Literature. To what extent do ?The Handmaid?s Tale? and ?Brave New World? support or refute this view? Disillusioned by the societies that lay before them, Huxley and Atwood crafted fascinatingly bleak, futuristic satires in which the past had been abolished. Within the midst of Huxley?s technocratic London and Atwood?s theocratic Gilead, two dehumanised masses merely exist to fulfil the ideologies of their omnipotent rulers. Each society of conditioned and religiously brainwashed individuals appeals to the modern reader, as such ideas are horrifically paralleled to the potential future of our world. Both Brave New World and The Handmaid?s Tale isolate sexual intercourse from emotions and reproduction. In Brave New World, society worship Henry Ford?s dictum that ?history is bunk? and thus, completely disregard it. The ?bad old days? tradition of monogamy is utterly obscene; the hypnopaedically taught notion that ?everyone belongs to everyone else? is ?axiomatic? and obstinate. Bernard?s uncomfortable abbreviation of ?mother? to ?-m? in chapter 11 also expresses the World State?s abhorred attitude to the concept of family; it is full of ?suffocating intimacies?. ...read more.

Contrastingly to Huxley?s characters, the Handmaids are aware of their dystopian circumstances, yet rarely see it physically. Sightlessness is a motif and escape route within the novel; chapter 4 notes the peripheral vision-obstructing ?wings? as part of the Handmaids? attire. Atwood describes Offred?s eyes obediently closed during ceremonies, as well as the Aunts limiting the Handmaids' view of the world via film in chapter 14: ?they only show us victories, never defeats.? The concept of sightlessness links to darkness, tapping into the readers fears, which heightens the excitement and appeal of the novel. Arguably, the most significant example of deliberate blindness exists in the preliminaries of chapter 10 ? Offred sings the hymn ?Amazing Grace?, admitting ?I don?t know if the words are right [?] I can?t remember.? In actuality, she alters the final line from: ?Was blind, but now I see?, to: ?Was bound, but now am free?. The admittance than she ?can?t remember? implies that her lyrical decisions are unconscious, drawing upon the ?dark, inaccessible part of our personality?, the Freudian ?Id?, which is concerned with our ?instinctual drives? and deepest desires. Offred?s diction of ?free? is indicative that her deepest desires are not to remove her wings and see her reality, but to solely evade it ? to be free. ...read more.

The social-psychological phenomenon exposed how the Deindividuation of artificially characterised ?guards? and ?inmates? could lead to an outbreak of anonymous hostility. With birth and life so bleakly represented in the novels, it is not unfitting that both trivialise death. The Nurse at Linda?s bedside in Brave New World is perplexed at John?s outcry, ?as though death were something terrible, as though anyone mattered that much.? Comparably, Offred admits she ?didn?t hear the bells? that signify the death penalty, ?perhaps I?ve become used to them.? The death sentence is greeted with ?the same platitudes [?] slogans [?] phrases?, which robotises and rationalises the process. The presence of a ?stage? for the hanging of felons as the Handmaids ?file onto the lawn? to watch, turns the procedure into a performance, and potentially plays on the fascination a 21st century reader has with the mystery of death and lifelessness, no matter how chilling it is. Conclusively, both novels manufacture sinister populations of inhumane beings that entice the readers? interests. This is corroborated by the scope of psychological theses that depict the human mind as a system attracted by otherness and horror. Essentially, the reader is captivated by the parallels that can be drawn between both dystopian novels and our world. ?I would not put anything into it that human societies have not already done? ? Margaret Atwood. ...read more.