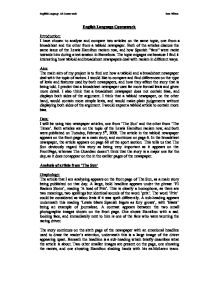 The difference between a tabloid and broadsheet article

English Language Coursework Introduction: I have chosen to analyse and compare two articles on the same topic, one from a broadsheet and the other from a tabloid newspaper. Both of the articles discuss the same issue of the Lewis Hamilton racism row, and how Spanish "fans" were racist towards him during a test session in Barcelona. The topic engages me because I find it interesting how tabloid and broadsheet newspapers deal with racism in different ways. Aim: The main aim of my project is to find out how a tabloid and a broadsheet newspaper deal with the topic of racism. I would like to compare and find differences on the type of lexis and features used by both newspapers, and how they affect the story that is being told. I predict that a broadsheet newspaper uses far more formal lexis and gives more detail. I also think that a broadsheet newspaper does not contain bias, and displays both sides of the argument. I think that a tabloid newspaper, on the other hand, would contain more simple lexis, and would make plain judgements without displaying both sides of the argument. I would expect a tabloid article to contain more bias. Data: I will be using two newspaper articles, one from 'The Sun' and the other from 'The Times'. Both articles are on the topic of the Lewis Hamilton racism row, and both were published on Tuesday, February 5th, 2008. The article in the tabloid newspaper appears on the front page as a main story, and continues on page 6. In the broadsheet newspaper, the article appears on page 68 of the sport section. This tells us that The Sun obviously regard this story as being very important as it appears on the FrontPage, whereas The Guardian doesn't think that the story is a major one for the day, as it does not appear on the in the earlier pages of the newspaper. ...read more.

Pre-modification is also used in tabloid newspapers to try to emphasis something strongly, or to make the article appear more attractive to the reader. The complexity of the sentences, as expected in a tabloid newspaper article, are quite simple with very few being complex. The complex sentences are still easy to read as clauses are separated with commas and hyphens. The main two sentence types that appear within the article are declarative and imperative sentences. Declarative sentences are used to make statements within the article, for example, 'Some even mocked him with black make-up, wigs and t-shirts...'. Imperative sentences are used to give orders or strong suggestions, for example, '"I'd like to see our government make a really big issue"'. Minor sentences do not occur in the newspaper articles as they are usually found in spoken texts. Ellipsis also does not appear because it is a written, not a spoken text. The syntax of the article is Standard English throughout. Analysis of article from 'The Times' Graphology: The article that I am analysing in the broadsheet newspaper appears on page sixty-eight in the sports section of 'The Times'. A fairly large bold headline appears at the top of the article, this describes what the article is about in a very formal tone, without using any humour in order to attract attention. Two small sub-headings appear beneath the headline which gives two main important factors that will be discussed further in the article. Underneath this, they tell the readers who wrote the article, which shows they are obviously very proud of there reporters. The article consists of four main columns of text, beneath of which is a large photographic image. This image shows a picture of the racists who were taunting Hamilton, and is followed by a caption detailing further what the image is about. Phonology: Spoken language is used throughout the broadsheet article in the form of quotations from other people. ...read more.

Pre-modification is also used densely within the article, with simple connectives also being appearing. Again, broadsheet newspapers contain longer and more complex sentences, and the punctuation is more formal and complex. Pre-modification is made use of less in this article, although it is still used in few places. The tone of the tabloid article is quite forceful to the reader; in trying to make them believe what they are saying is completely correct. A light-hearted approach is also taken with the use of humour, such as the homophone headline. The tone in the broadsheet article, on the other hand, is more moderate and restrained, without the use of humour or puns. The story is taken more seriously compared with the light-hearted version that the tabloid presents. The broadsheet article does not directly address the reader and remains more impersonal, the tabloid article takes a more conversational tone with its audience. Conclusion: Through evaluating and analysing both articles from a broadsheet and tabloid newspaper, I feel as if I have successfully achieved the aims I set out for myself beforehand. My main aim what to find out how a tabloid and a broadsheet newspaper deal with the topic of racism, which I now have successfully discovered. In brief, The Sun takes a far more light-hearted tone in dealing with the topic, adopting features such as humour. The Times, on the other hand, takes the issue far more seriously and deals with it in a formal manner. I also predicted that the broadsheet article would use far more formal lexis, give more detail and contain less obvious bias, which I have proved to be correct. For the tabloid newspaper, I thought at the beginning that it would contain more simple lexis, making judgements and containing more bias, which I have also proved to be true. Overall, I feel that after successfully completing my project, I have achieved all of my aims, and have successfully proved my predictions to be correct. ?? ?? ?? ?? English Language AS Coursework Sam Wilson ...read more.