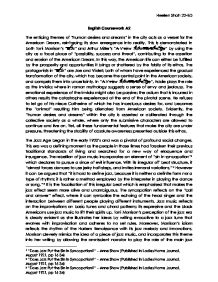 The enticing themes of human desires and dreams in the city acts as a vessel for the American Dream, reinforcing its slow emergence into reality. This is demonstrated in both Toni Morrisons Jazz and Arthur Millers A View from the Brid

English Coursework A2 The enticing themes of "human desires and dreams" in the city acts as a vessel for the American Dream, reinforcing its slow emergence into reality. This is demonstrated in both Toni Morrison's "Jazz" and Arthur Miller's "A View from the Bridge" by using the city as a focal place of "possibility, success and threat", contributing to the assertion and erosion of the American Dream. In this way, the American life can either be fulfilled by the prosperity and opportunities it brings or shattered by the falsity of its ethos. The protagonists in "Jazz" are Joe and Violet; both of whom have experienced the gradual transformation of the city, which has become the central point in the American society, and compels them into uncertainty. In "A View from the Bridge", Eddie plays the role as the Invidia; where in roman mythology suggests a sense of envy and jealousy. The emotional experience of the Invidia might also be passive; the odium that is incurred in others results the catastrophe experienced at the end of the pivotal scene. He refuses to let go of his niece Catherine of which he has incestuous desires for, and becomes the "animal" resulting him being alienated from American society. Evidently, the "human desires and dreams" within the city is asserted or obliterated through the collective society as a whole, where only the submissive characters are allowed to continue and live on. Yet, all these fundamental features that make the city are under pressure, threatening the stability of absolute awareness presented outside this ethos. The Jazz Age began in the early 1920's and was a pivotal of profound social changes. This era was a defining moment as the people in those times had forsaken their previous traditional standards of living and searched for a new way of eloquence and insurgence. The rebellion of jazz music incorporates an element of "sin in syncopation"1 which declares to pursue a since of evil influence. ...read more.

However her identity moves into the light, where later in the novel, she searches for peace and longs to heal herself and her marriage, by taking ownership of her happiness and refuses to be a victim. Violets character is an engineered example of "possibility, success and threat" where the city offers a second chance, an American Dream - an American life that can be fulfilled by the opportunities it brings. Violet's turning point and realisation just goes to show that the city is not all bad. By applying the concept of Janus into both contexts, I believe that Joe's account had started off deficiently, where he immediately became the murderer, as he was "the one who shot the girl. 15" However, the narrator skilfully eradicates the reader's bad perception of Joe, and counteracts them with other characters accounts, and we immediately start to sympathise for him, as we realise how much pain he has gone through. For example, Dorcas's aunt realised "that the man who killed her nice cried all day and for him and for Violet that is as bad as jail. 16" The aunt empathizes for Joe, as he is feels imprisoned and mourns all day at the dead girl that he once used to love. Controversially, Eddie's character is deceitful; his initial impression upon the audience is one of complete self-confidence and control with an aura of intellectual arrogance, as he is successfully able to manipulate the American society. Eddie's jealousy is his driven motivation, fuel and strength, and he allows this emotion to plot against those whom he hates. The city ultimately serves as a setting to the development of Trace's new self as he is "caught midway between was and must be17". However it can only provide a carefully conquered and redefined freedom. The city has been developed into both a friend and foe. In 1926, the black neighbourhood within Manhattan has become the capital of black America. ...read more.