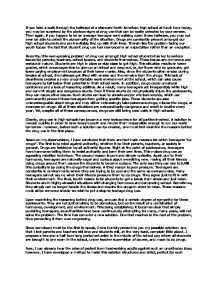 The final separation between drugs and school

If you take a walk through the hallways of a standard North American high school at lunch hour today, you may be surprised by the obvious signs of drug use that can be easily detected by your senses. Then again, if you happen to be an average teenager sent walking down those hallways, you may not even be able to detect the abnormality of the situation. Drugs are constantly present amongst our high school students and are inevitably tied up with their lives. Therein lies the problem facing our youth today: the fact that student drug use has now become an expectation rather than an exception. Recently, this ever-growing problem of drug use amongst high school students has led to serious issues for parents, teachers, school boards, and students themselves. These issues are numerous and serious in nature. Students are high in class or skip class to get high. This situation results in lower grades, which encourages kids to give up on school and drop out, or, for those who do graduate, get lower paying employment because of their lower marks. Also, since the students often smoke during breaks at school, the hallways get filled with smoke and the remains from the drugs. This lack of cleanliness creates a more uncomfortable work environment at the school, which can also cause teenagers to fall below their potential in their school work. In addition, drugs cause unnatural confidence and a lack of reasoning abilities. As a result, many teenagers act irresponsibly while high and commit stupid and dangerous stunts. Even if these stunts do not physically injure the adolescents, they can cause other issues. Such stunts can lead to arrests and/or criminal records, which can permanently prevent these teenagers from getting specific jobs. ...read more.

Even stunts committed in this state that are not dangerous, just stupid, can have serious negative consequences for the individual, such as criminal records and/or arrests. I will bring your attention once again to my rebellious best friend. While rebelling against his parents by being on drugs (and thus having a serious lack of judgment) he attempted to steal Visene from Wal-Mart. Naturally, he was caught, and rather than accept the consequences as he would have had he been sober, he instead tried to run away. Of course, this resulted in his arrest and multiple charges. These crimes are now on his record, and, though it will be cleared on his eighteenth birthday, when he applies to post-secondary schools it will still be present. As a result, he may be forced to go to a worse post-secondary school than he would have had he never rebelled against his parents and done drugs. Had this rebellion and drug use not occurred, he, and many others like him, would not have had these consequences. By skipping forward a few years after these arrests and criminal records occur, we can see even more consequences in the adult lives of these rebellious adolescents. If bad post-secondary options are chosen, this may result in low-paying employment. The lack of income can then cause desperation. As a result of this desperation, more drugs are used, and possibly sold, resulting in more arrests, and a vicious cycle is created. In fact, 60% of teenagers with criminal records in high school will end up in jail as an adult. Had these adolescents never rebelled against their parents, they would never have done drugs, stupid stunts, received criminal records, and gone to poor post-secondary schools that result in a desperate, vicious cycle of a life, eventually leading them to jail. ...read more.

Clean environments always improve learning. This statement is exemplified in third world countries. Why, in these countries, do they work so hard to clean schools? So that the environment is safe, clean, and easier to learn in. The same applies to North American high schools. By keeping the school clean of drug residue, we are creating a better learning environment, and raising grades. This class improves the school work of all students by providing a space to relax and keep all of their drugs separate from school. After all, can we really support the fact that our children so closely intertwine school and drugs? Having a History and Usage of Narcotics class mandatory for all students is a revolutionary, and yet, ironically, in my mind at least, also an incredibly simplistic idea to solve the drug use problem in our high schools. The class would effectively eliminate all the reasons for which students do drugs: rebellion, curiosity, peer pressure, and stress, while therefore simultaneously removing all of the negative effects that drug use has on our youth. In fact, it strikes me as mildly surprising that our current caring, hard-working adult generation, who clearly care so thoroughly for their children and students, would not consider this solution in their serious and numerous debates about how to end teenage drug use. How could it be that so many intelligent people, dedicated to their truly horrific punishments and harsh treatments could not consider such a serious proposition? I'm sure that all of our older generation could agree that having such a structured separation of drugs and school would really fix today's youth. I think all mature adults can agree that our main goal is to perfect tomorrow by solving today. This solution fits perfectly with that mantra. After all, what better way to fix today's generation than by imitating yesterday's? ...read more.