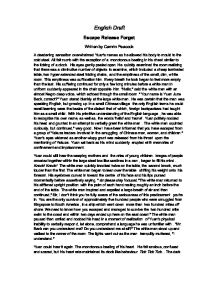 The Freedom of a Bad Dream

English Draft Escape Release Forget Written by Camrin Peacock A deadening sensation overwhelmed Yuan's nerves as he allowed his body to mould to the cold steel. All felt numb with the exception of a monotonous beating in his chest similar to the ticking of a clock. His eyes gently pealed open. He quickly examined the room realizing that there was a diminutive number of objects to examine, which included a cheap laminated table, two hyper extended steel folding chairs, and the emptiness of the small, dim, white room. This emptiness was suffocation him. Every breath he took began to feel more empty than the last. His suffering continued for only a few long minutes before a white man in uniform suddenly appeared in the chair opposite him. "Hello," said the white man with an almost Negro deep voice, which echoed through the small room." Your name is Yuan June Beck, correct?" Yuan stared blankly at the large white man. He was certain that the man was speaking English, but growing up in a small Chinese village the only English terms he could recall learning were the basics of the dialect that of which, foreign backpackers had taught him as a small child. ...read more.

"Mr. Beck can you understand me? Do you understand me at all?" The white man stood up and walked to the corner of the room. The lights went out as the man tranquilly muttered, "I understand." Yuan could hear it again. The monotonous beating of his heart. He felt anxious, confused and scared, but his heart rate maintained its clock like behaviour Tick Tick Tick... The dark room and the cold steel of his folding chair reminded him of the never ending night within the dreaded container, where the only way of telling night from day was when the temperature in the container went from hot to boiling. Yuan could clearly remember the hot sticky container, where the breeze was created by the lungs of the person who's legs were laying horizontally across his own. He could remember that by the 13th boiling hot day the container began to undertake the thick overwhelming smell of rotting corpses, which he soon discovered were slowly piling up near the back of the container. Yuan had assumed these to be the people who were cut and bruised prior to entering the container, since they were undoubtedly the weakest . It was by the count of the 21st day that he noticed the bodies of the unharmed and healthy people were beginning to contribute to the mound of corpses, due to starvation. ...read more.

It was no longer the air he had been breathing for the past half an hour . Within seconds the images in his head became distorted and he could no longer recall his memories of being in the container, even though, he knew he had been within the treacherous confinements of that oversized tin can. His head began to spin. Yuan dropped the pen as his eyes began wandering the room for a moment before focusing on the white man who was now wearing a mask. Yuan's eyes became heavy as if they were weighted, and as they shut he heard the white man's deep voice muffled by the mask utter ,"It's done. He knows nothing." Yuan's eyes peeled open slowly allowing the warming rays of the sunlight to revive his eyes. As his mind regained consciousness he could feel the soft touch of silk sheets and fluffy pillows. The air was clean and a joy to breathe with its refreshing salty scent. As he sat up to admire the beauty of the room, Yuan, noticed a brass alarm clock, which had seized up. He examined the clock and gave it a gentle tap on the back as if it were a baby, and just like a new born taken from the womb it's endless and monotonous cry once again began Tick Tick Tick... ...read more.