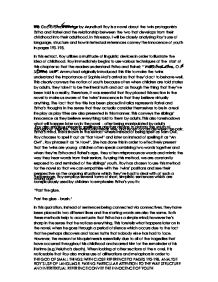 The God of Small Things by Arundhati Roy. In this essay, I will be closely analysing Roys use of language, structure and how intertextual references convey the innocence of youth in pages 193-198.

The God of Small Things by Arundhati Roy is a novel about the twin protagonists Estha and Rahel and the relationship between the two that develops from their childhood into their adulthood. In this essay, I will be closely analysing Roy's use of language, structure and how intertextual references convey the innocence of youth in pages 193-198. In this extract, Roy utilizes a multitude of linguistic devices in order to illustrate the idea of childhood. Roy immediately begins to use various techniques at the start of this chapter so that the readers understand Estha and Rahel; "Welcome Home, Our Sophie Mol"- Ammu had originally introduced this title to make the twins understand the importance of Sophie Mol's arrival so that they'd act to behave well. This clearly conveys the notion of youth because often when children are told stories by adults, they take it to be the literal truth and act as though the thing that they've been told is a reality. Therefore, it was essential that Roy placed this section in the novel to make us aware of the twins' innocence in that they believe virtually anything. ...read more.

This foretells what happens later on in the novel, when he goes through a period of silence which occurs due to the fact that he perhaps discovers and faces truths that nobody else has had to face. However, the reason for his quietness is essentially due to all of the tragedies that have occurred throughout his childhood and scarred him for the remainder of his lifetime (e.g.Velutha's death). When looking at other sections of the novel, it is noticeable that Roy also makes use of alliterations and metaphors in order to highlight the feelings of Estha throughout the extract. For example by analysing "A sadly swirl" we can see Roy is attempting to mirror Estha's thoughts and feelings, which she does successfully. The soft "s" sounds of the consonants helps to stress Estha's misery and the theme of hopelessness that seems to be running throughout this extract. In this given section, Roy also uses references from Shakespeare's Macbeth, although she has moulded it to suit what is currently occurring in the novel. "...Witches of Macbeth. Fire burn, banana bubble" The play, Macbeth, is often introduced to children when they are young and the most common sentence that they refer to when asked about the play is 'Fire burn, cauldron bubble'. ...read more.

The whole extract has been structured as a list depicting what is allowed in society and what it is stigmatic. Looking at the next paragraph, Roy also uses lists to show Estha's thoughts. In this extract she mentions three of them, with the last being mentioned later. These points are: "(a) Anything can happen to Anyone. ...(b) It's best to be prepared. ...(c) A boat" This gets the audience ready for what will occur later on in the novel - to expect what is unexpected and not to be shocked by whatever happens. The fact that Roy refers to a boat makes us realise that something controversial is going to occur in the novel regarding the boat that will shock us. It makes us question who is going to be involved: Estha and Rahel or perhaps Ammu and Velutha? This makes us explore all the possible outcomes of the hint which Roy has laid out for us. Roy's employed several devices, such as metaphors and structural methods, to convey the message of innocence and youth as well as to prefigure the plot of the novel. For example, the quote "Welcome Home, Our Sophie Mol" was used to present innocence of childhood; however, it was also used to foreshadow the incest that was to occur. ...read more.