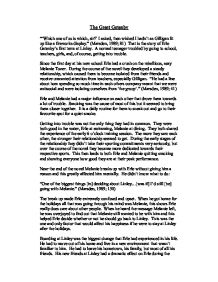 The Great Gatenby "'Which one of us is which, sir?' I asked, then wished I hadn't as Gilligan lit up like a fireworks display." (Marsden, 1989; 81) That is the story of Erle Gatenby's first term at Linley. A normal teenager troubled by going to school, teachers, girls, and, of course, getting into trouble. Since the first day at his new school Erle had a crush on the rebellious, sexy Melanie Tozer. During the course of the novel they developed a steady relationship, which caused them to become isolated from their friends and receive unwanted attention from teachers, especially Gilligan. "He had a line about how spending so much time in each others company meant that we were antisocial and were isolating ourselves from 'the group'." (Marsden, 1989; 41) Erle and Melanie had a major influence on each other that drove them towards a lot of trouble. Smoking was the cause of most of this but it seemed to bring them closer together. It is a daily routine for them to sneak out and go to their favourite spot for a quiet smoke. ...read more.

When he heard the message Melanie left, he was overjoyed to find out that Melanie still wanted to be with him and this helped Erle decide whether or not he should go back to Linley. This was the one and only factor that would affect his happiness if he were to stay at Linley after the holidays. Boarding at Linley was the biggest change that Erle had experienced in his life. He had to move out of his home and live in a new environment that wasn't familiar to him. He had to leave his hometown, his family, but most of all his friends. His new friends at Linley had a dramatic effect on Erle during the course of the novel. He looked at each of them in a different and described them individually. The weirdest of the lot was Ringworm. "That night, round about midnight, I awoke to see the dark figure of the guy called Ringworm standing at the foot of my bed," (Marsden; 1989, 19) ...read more.

But Erle seems to use his detentions as fuel to get himself into even more trouble. Crewcut, Erle's swimming coach, seems at first to be another teacher that Erle hates. But, by the end of the novel the reader finds out Crewcut's real name, Mr Scott, because Erle develops a friendship with him. Crewcut was hard on Erle at first, but this sparked his determination to prove himself to Crewcut and in the process blow all the other swimmers out the water with his amazing swimming ability. Erle's experiences at Linley had a dramatic impact on his approach to life. All these are linked back to Erle's parent's decision to send him to boarding school. Melanie affected Erle rapidly because she immediately brought out a whole new side to Erle that we wouldn't have seen if not for her, his passionate side. The teachers kept Erle on the ball throughout the novel. Boarding at Linley introduced Erle to new friends and brought out his swimming ability. In the end Erle finds for himself that there is a lot more to life than making jokes. ...read more.