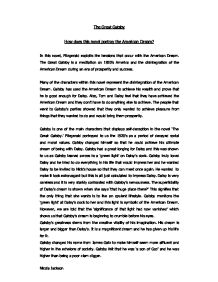 How does this novel portray the American Dream?

In this novel, Fitzgerald exploits the tensions that occur with the American Dream. The Great Gatsby is a meditation on 1920’s America and the disintegration of the American Dream during an era of prosperity and success.

Gatsby is one of the main characters that displays self-deception in the novel ‘The Great Gatsby.’ Fitzgerald portrayed to us the 1920’s as a period of decayed social and moral values. Gatsby changed himself so that he could achieve his ultimate dream of being with Daisy. Gatsby had a great longing for Daisy and this was shown to us as Gatsby leaned across to a ‘green light’ on Daisy’s dock. Gatsby truly loved Daisy and he tried to do everything in his life that would impress her and he wanted Daisy to be invited to Nick’s house so that they can meet once again. He wanted  to make it look extravagant but this is all just calculated to impress Daisy. Daisy is very careless and it is very starkly contrasted with Gatsby’s nervousness. The superficiality of Daisy’s dream is shown when she says ‘that huge place there?’ This signifies that the only thing that she wants is to live an opulent lifestyle. Gatsby mentions the ‘green light’ at Daisy’s dock to her and this light is symbolic of the American Dream. However, we are told that the ‘significance of that light had now vanished’ which shows us that Gatsby’s dream is beginning to crumble before his eyes.

Gatsby’s greatness stems from the creative vitality of his imagination. His dream is larger and bigger than Daisy’s. It is a magnificent dream and he has given up his life for it.

Gatsby changed his name from James Gatz to make himself seem more affluent and higher in the echelons of society. Gatsby felt that he was ‘a son of God’ and he was higher than being a poor clam digger.

We are able see the true extent of Gatsby’s dream when Tom says ‘he didn’t even stop his car.’ This is a very ironic moment because Gatsby has been true to his dream even in reality. This is because he has chivalrously protected Daisy who was the driver of the ‘death car’ that killed Myrtle. Gatsby keeps a vigil on Daisy’s house and this is a very poignant moment and it represents the death of his dream. Gatsby was murdered because of the love that he had for Daisy as he took the blame for killing Myrtle. When he died it was described as the ‘holocaust’ which illustrates to us the immensity of Gatsby’s dream. The death of his dream led to the destruction of his life.

Even in death Fitzgerald shows Gatsby in a better and more heroic light. Gatsby’s dream gives him a purpose in life and elevates him over other characters in the novel.

As we learn in the novel, Gatsby earned his money through criminality. There are hints at his criminality throughout the entirety of the novel. His guests are drinking ‘cocktails’ during the prohibition and this enticed more people to his house. He has an air of mystery surrounding him and there is a suggestion of shady dealings. Gatsby has regular phone calls from places such as ‘Philadelphia’, ‘Chicago’ and ‘Detroit’ and this hints at his criminality in these countries. Gatsby is friends with the policemen and this could have to do with his criminality. Gatsby is a friend with a man called ‘Meyer Wolfsheim’ and there are hints once again at criminality as we learn that ‘he’s the man who fixed the World’s Series back in 1919.’

In this novel we sense that although Nick knows that Gatsby is involved in criminal activities he is moved by his suffering and the loyalty of his love. Gatsby dismissed his staff’ and replaced them with half a dozen others.’ These people came from Meyer Wolfsheim and so these people may not gossip about Daisy.

Daisy and Tom are an example of The American Dream that has gone bad. They have achieved everything in life and do not have anything to do in life to achieve it. They are high in the echelons of society and feel that they have nothing to do or achieve in life.

Daisy knows that her husband is cheating but she remains with him because he provides her with the life that she desires. They are very restless as Daisy says ‘what’ll we do with ourselves this afternoon…and the day after that, and the next thirty years?’ This shows us the ennui of the idle rich and the superficiality of their lives. Tom and Daisy are an example of the American Dream gone bad because they are restless as they have achieved everything that they will ever need but they still have a longing for something in life.

When Tom and Daisy first met Tom’s aristocratic status pleased Daisy as ‘his position’ meant that he could provide for her. Tom and Daisy ‘were careless people’ and ‘they smashed up things and creatures and then retreated back into their money or their vast carelessness.’

They have achieved the American Dream yet it has brought them no fulfilment. Their characters have shown us that the acquisition of wealth does not bring you any happiness.

Throughout the novel we learn of Tom Buchannan and his affair with Myrtle Wilson. For a long time he has been having an affair with her and Daisy knew about it but she stayed with Tom because of his wealth.

Throughout the novel there are references of Tom speaking to his mistress on the telephone. Myrtle comes from the valley of ashes and this is a physical representation of the kind of world that Tom lives in.

Tom and Nick meet with Myrtle on the train and they go to an apartment that Tom has bought her. She is very scornful of her own class as she calls them ‘these people.’ She feels that she is better than her husband as she says that ‘he wasn’t fit to lick her shoes.’ However, Tom does not like Daisy to be mentioned and when Myrtle did ‘Tom Buchannan broke her nose with her open hand.’

Tom was distraught when Myrtle was killed and he could not do anything to help her. It was because of Tom lying to Mr Wilson that Gatsby got killed. He protected his wife at the expense of another person.

The guests that came to Gatsby’s parties were striving to achieve the American Dream. The guests were careless and they did not care about any damage that they did to Gatsby’s house as he servants were ‘repairing the ravages of the night before.’  They are all very superficial and they do not actually know who Gatsby is or what it is that he does. They gossip about him and they say that ‘he killed a man’ but they do not actually know who he is.

They want a purpose in life and they do this by trying to achieve higher in the echelons of society.

The American Dream is portrayed in many different ways within this novel. Gatsby has a dream that has given him a purpose in life but Tom and Daisy are restless as they feel that they have achieved everything that they need to do but they are not content in their lives.