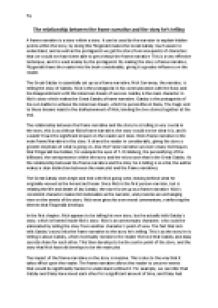 The Great Gatsby is essentially set up as a frame narrative. Nick Carraway, the narrator, is telling the story of Gatsby.

This then develops to be the centre point of the story, and the story that Nick has told develops to be the main plot. The impact of the frame narrative on the story is massive. This is due to the way that it takes effect upon the reader. The frame narrative allows the reader to uncover events that would be significantly harder to understand without it. For example, we can infer that Gatsby and Daisy have loved each other for a significant amount of time, and Daisy had moved on in anticipation for Gatsby by marrying Tom. "And what's more, I love Daisy too? This quotation is taken from Nicks frame narrative which uncovers vital information for the reader. The frame narrative of Gatsby?s life, and the story Nicks telling merge at this point, as they confess their love for each other, which was the basis of Nicks frame narrative within the Great Gatsby. Nick Carraway expresses the story from his point of view, from his memory in first person. He also participates in the action of the plot from time to time and evaluates the events as they occur in the story. ...read more.

Nicks story is revered as it crops up in every chapter of the story. Regardless of what has happened in the chapters, the story will always take a pause from its main plot, giving Nick his chance to explain to the reader his point of view. This is Fitzgerald?s way of shortening the story whilst keeping Nicks point of view in contention. As the story progresses Nicks influence and viewpoint become more apparent and frequent. For example, when Myrtle is introduced, the narrator begins to explain his point of view. The relationship between the frame narrative and the story he?s telling is very important, as it uncovers many narrative techniques. Nicks frame Narrative in particular uncovers many techniques in the story. For example "The eyes of Doctor T. J. Eckleburg are blue and gigantic-their retinas are one yard high. They look out of no face but, instead, from a pair of enormous yellow spectacles which pass over a non-existent nose." This is a quote from Nicks frame narrative. Dr. Eckelburg is introduced at this point. He takes on an image of a human figure, which he is personified at many times throughout the novel. From Nicks Frame narrative we can learn that the story he is telling gives us the feeling that T.J Eckleberg is omnipresence in the microcosm that is the story, as he sees all the events that unfold. ...read more.