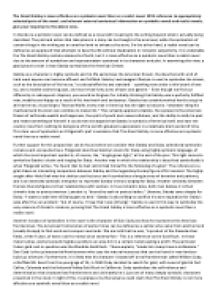 The Great Gatsby is more effective as a symbolic novel than as a realist novel. With reference to appropriately selected parts of the novel, and relevant external contextual information on symbolic novels and realist novels, give your response to the above view.

Transfer-Encoding: chunked ﻿The Great Gatsby is more effective as a symbolic novel than as a realist novel. With reference to appropriately selected parts of the novel, and relevant external contextual information on symbolic novels and realist novels, give your response to the above view. In literature a symbolic novel can be defined as a novel with meaning to the writing beyond what is actually being described. The plot and action that take place in a story can be thought of as one level, while the symbolism of certain things in the writing act on another level to enhance the story. On the other hand, a realist novel can be defined as an approach that attempts to describe life without idealisation or romantic subjectivity. It is undeniable the The Great Gatsby contains elements of both, but it is more effective as a symbolic novel than a realist novel due to the amount of symbolism and representation contained in its characters and plot. In examining this view, a good place to start is how Gatsby symbolises the American Dream. Gatsby as a character is highly symbolic and his life epitomises the American Dream, the idea that with a bit of hard work anyone can become affluent and fulfilled. Gatsby?s extravagant lifestyle is used to symbolise the dream, such as the description of his house, ?a colossal affair by any standard? ...read more.

In these metal rushes, workers would migrate quickly to an area rich in a certain metal seeking a profit. The particular Yukon gold rush in question was the Klondike Gold Rush. These exploits, ?made him many times a millionaire.? Dan Cody is the quintessential frontiersman who uses the natural resources that can be found in new lands to build up a fortune. Furthermore, it is likely that his character is based off a real frontiersman called William Cody, or Buffalo Bill. Even from the young age of 14, in 1860 Cody decided to search for gold, with news of gold at Fort Collins, Colorado and the Holcomb Valley Gold Rush in California. Cody symbolises the self-reliance and determination that characterised frontiersmen and ultimately he is just one of many deeply symbolic characters presented in the novel. In light of this, it perplexes me that anyone could claim that The Great Gatsby is not more effective as a symbolic novel than as a realist novel. Those that oppose my view claim that The Great Gatsby is more effective as a realist novel than a symbolic novel. Richard Chase defined several characteristics of what makes a realist novel. He said that a realist novel uses selective presentation of a reality with an emphasis on verisimilitude, even at the expense of plot, and that characters appear real in temperament and motive. ...read more.

We certainly see these dark undertones in The Great Gatsby. If we take racism as an example, the form that Fitzgerald uses to describe to us the character of Tom Buchanan is decidedly naturalistic. Fitzgerald wishes to convince the reader that Tom is a highly despicable character, but he does not come out and say such in so many words. Rather, he meticulously describes Tom?s actions so that the reader is left to draw no other conclusion. His views are clearly racist, evidenced by his choice of reading: ?Have you read the Rise of the Coloured Empires by Goddard?? This refers to a genuine book that was around at that time, titled The Rising Tide Of Colour by Lothrop Stoddard, which increases the realism. Tom feels threatened by the rising power of racial minorities and wishes to preserve the archaic status quo. Fitzgerald?s skilful use of naturalistic realism would suggest that The Great Gatsby is more effective as a realist novel rather than a symbolic novel. To conclude, after careful consideration we determine that although the novel is highly effective in both genres, ultimately it is more effective as a symbolic novel than a realist novel. Some of the events and characters depicted are simply too exaggerated for it to be wholly realist, and instead are better looked at as symbolic events. The opposing arguments have some merit but ultimately they fail to realise the true implications and context of The Great Gatsby. ...read more.