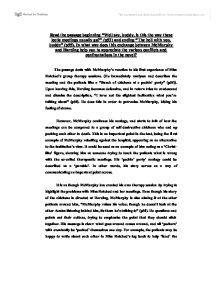 &quot;The hell with you, buddy&quot; - In what way does this exchange between McMurphy and Harding help you to appreciate the various conflicts and confrontations in the novel?

Read the passage beginning "Well say, buddy, is this the way these leetle meetings usually go?" (p53) and ending "The hell with you, buddy" (p55). In what way does this exchange between McMurphy and Harding help you to appreciate the various conflicts and confrontations in the novel? The passage deals with McMurphy's reaction to his first experience of Miss Ratched's group therapy sessions. (He immediately analyses and describes the meeting and the patients like a "Bunch of chickens at a peckin' party" (p54)). Upon hearing this, Harding becomes defensive, and in return tries to condescend and dismiss the description, "I have not the slightest inclination what you're talking about" (p54). He does this in order to patronise McMurphy, hiding his feeling of shame. However, McMurphy continues his analogy, and starts to talk of how the meetings can be compared to a group of self-destructive chickens who end up pecking each other to death. This is an important point in the text, being the first example of McMurphy rebelling against the hospital, appearing as an alternative to the institution's view. ...read more.

McMurphy is not reluctant to place blame and pinpoint the main instigator in the group's self destructive nature. Miss Ratched is the woman who according to him "pecks that first peck" (p54). He tries to express the idea that Miss Ratched is the manipulative force behind the patient's traumas and arguments. Harding's reaction to McMurphy's views is not an unusual one: "what the fellows were doing today was for my own benefit" (p55). He tries to put across the argument that the group meeting were he was heckled and bullied by his fellow patients was actually doing some good to him. But is he trying to convince McMurphy of this, of in fact convince himself? I think his reaction in this passage is significant because it is an example of how the patients are brainwashed into believing that Miss Ratched's techniques are beneficial. Even Harding, an intellectual (albeit slightly arrogant) Acute patient is indoctrinated by the Nurse's ethos, as though he is unable to think independently. I believe that Harding's reaction is completely transparent. ...read more.

In this passage, it is as though Harding and McMurphy represent these two conflicting sides. Harding seems stressed and unwilling to accept McMurphy's analysis, as though he doesn't want him to break down the system that he has learned to accept and live with. It is as though Harding is in denial, and therefore resists McMurphy's attempts to 'free' them from the confinement of Miss Ratched's rules. I think many of the characters have been made to believe that Miss Ratched's ideas are the 'be all and end all', and have become dependent upon her authority. This seems especially true when it is later revealed that most of the Acutes are not required to be at the hospital, and are, in a sense, there voluntarily. It is as though Miss Ratched's influence will not allow them to believe that they can live outside of the institution's walls. McMurphy is the figure that steps in and tries to help these patients, allowing them to think on their own, giving them self-confidence. Therefore, the passage is the first example of McMurphy taking on the hospital. ...read more.