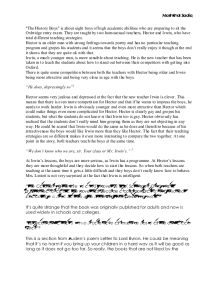 "The History Boys" is about eight boys of high academic abilities who are preparing to sit the Oxbridge entry exam. They are taught by two homosexual teachers, Hector and Irwin, who have total different teaching strategies. Hector is an older man with strong feelings towards poetry and has no particular teaching program and gropes his students and it seems that the boys don't really enjoy it though at the end it shows that they are quite ok with that. Irwin, a much younger man, is more sensible about teaching. He is the new teacher that has been taken in to teach the students about how to stand out between their competitors with getting into Oxford. There is quite some competition between both the teachers with Hector being older and Irwin being more attractive and being very close in age with the boys. "He does, depressingly so"1 Hector seems very jealous and depressed at the fact that the new teacher Irwin is clever. This means that there is even more competition for Hector and that if he wants to impress the boys, he needs to work harder. ...read more.

He could be meaning that it's no harm if you bring up your children in a hard way as it will be good as long as it does not go too far. So really, the books that are not liked by the children and yet are forced upon them won't harm them and it will be useful to them one day. In the next section of the play, Irwin and the boys are talking about the Second World War and the reasons for why it really happened. Irwin starts off and lets the boys come to a conclusion. "Which, sir, since Wilfred Owen says men were dying like cattle, is the appropriate word."9 Hector finds it important that they know poems by heart as it will be understood by them one day, and that is what really happens here. They use their knowledge that's given over by Hector not just in English but in their other lessons meaning that learning these poems by heart really is useful. The poem describes how so many men were dying during the war that they looked like masses of animal. ...read more.

Poems are the words of the poet and you can interpret it in any way you like yet you cannot exactly know what the poet meant with his words. "In other words..."14 Again, this is something they have learned in Hector's lessons. Irwin thinks the lessons of Hector are more fun than educational but this clearly says that they do learn things in his lesson. At schools teachers spoon-feed their students all the way through. When Rudge asks Irwin; "What do I write down?"15 Irwin responds with; "I must not write down every word that teacher says."16 Irwin clearly wants them to think for themselves. He's happy to help them along and tell them what direction they need to go to, but at the end of the day, it has to be them that think it through and they should come to an own conclusion on their own. 1 The History Boys, Hector, p.22 2 Hector p. 70 3 Mrs. Lintott, p.22 4 Mrs. Lintott 83 5 Mrs. Lintott, p. 85 6 Hector, p. 23 7 http://en.wikipedia.org/wiki/Catcher_in_the_rye 8 mrs.` Lintott, 23 9Dakin, p.24 10irwin, p.24 11 Irwin p. 25 12Irwin p. 25 13Lockwood p25 Word count; 933 ?? ?? ?? ?? Mashkhal Sadiq ...read more.