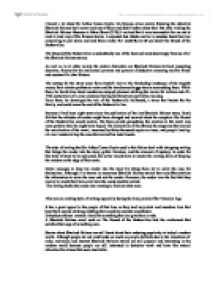 The Hound of the Baskervilles

I heard a lot about Sir Arthur Conan Doyle, his famous crime novels featuring the detective Sherlock Holmes but I never read any of them and didn't bother about that. But after visiting the Sherlock Holmes Museum at Baker Street (221b) I realized that it was inexcusable for me not to read at least any of the famous stories. I corrected that mistake and to my surprise found them too compelling to pull down and read them avidly. So I would like to tell you about The Hound of the Baskervilles. The Hound of the Baskervilles is undoubtedly one of the best and most deservingly famous of all the Sherlock Holmes stories. As well as in all other novels the central characters are Sherlock Holmes brilliant consulting detective, famous for his intellectual prowess and powers of deductive reasoning and his friend and assistant Dr John Watson. ...read more.

His fears proved groundless; the reaction to the novel was more positive than he might have hoped. The circulation of The Strand, the magazine that carried the serialization of the novel, increased by thirty thousand copies an issue, and people lined up all over London to buy the ones that carried his installments. The style of writing that Sir Arthur Conan Doyle used in this fiction dealt with intriguing writing that brings the reader into the story, gothic literature, and the element of mystery. In order for this style of story to be replicated, the writer would have to master the writing skills of keeping the readers on the edge of their seats. Doyle manages to keep his reader into the story by letting them try to solve the case for themselves. ...read more.

Stories about Sherlock Holmes can still boast about their enduring popularity in today's modern world. Although people do not read books as much as people did back due to the inventions of radio, television and internet Sherlock Holmes stories are still popular and interesting in the modern world because people are still interested in detective work and have this natural attraction for crimes that seem insolvable. To my way of thinking, The Hound of the Baskervilles is a brilliantly crafted detective story that is truly unparalleled and has all the elements that are needed for a great crime mystery such as action-packed moments, a wonderful intriguing central story including a supernatural element, masterful descriptive writing that bring to life the bleak landscape in which the mystery is set, colorful characters doubling up as potential suspects, plenty of red herrings and many twist and turns to keep the readers excited in anticipation of forthcoming actions. ...read more.