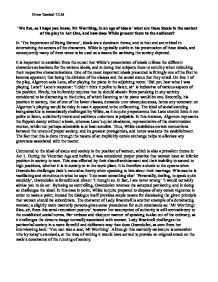 The Importance of Being Earnest - 'We live, as I hope you know, Mr Worthing, in an age of ideals' what are these ideals in the context of the play in Act One, and how does Wilde present them to the audience?

'We live, as I hope you know, Mr Worthing, in an age of ideals' what are these ideals in the context of the play in Act One, and how does Wilde present them to the audience? In 'The Importance of Being Earnest', ideals are a dominant theme, and to that end are critical in determining the actions of the characters. Wilde is typically subtle in his presentation of these ideals, and consequently many of them come to be used as a means for satirising the society depicted. It is important to establish from the outset that Wilde's presentation of ideals utilizes the different characters as bastions for the various ideals, and in doing that subjects them to scrutiny when ridiculing their respective characterizations. One of the most important ideals presented is fittingly one of the first to become apparent; that being the division of the classes and the social status that they entail. On line 1 of the play, Algernon asks Lane, after playing the piano in the adjoining room: 'Did you hear what I was playing. ...read more.

In fact, I am never wrong' 'I would certainly advise you to do so'. By being so controlling, Gwendolen reverses the accepted patriarchy, and in doing so challenges the ideal. In this case in point, Wilde is quite prepared to dispose of any comic vignettes in order to make a point; instead the dialogue itself provides ample means for dismissing the given principle that women should be subordinate. The character of Lady Bracknell is another example of a dominating woman; a slightly more matronly persona gives some precedence for such commands as: 'Mr Worthing! Rise, sir, from this semi-recumbent posture' however her assumption of authority is still contradictory to the established social norms. Her verbose and eloquent manner of speaking is also out of the ordinary, as it challenges the demure image normally associated with women. Lady Bracknell challenges the patriarchal society in a more forceful and deliberate way than does Gwendolen, as seen from her interviewing Jack: 'You can take a seat, Mr Worthing'. Although this matronly caricature is somewhat trite by today's standards, at the time of writing it would have served to provide an original attack on the male's dominance of the running of society. ...read more.

Wilde's satire of this situation again helps to dismiss the validity of the ideal presented. Marriage is probably the most complex of all the ideals presented in Act One of the play, in that the view presented very much depends on the interaction of the two sexes, which in itself is a questionable motif, consequently a definite opinion can not be drawn from it. Ultimately, the presentation and satire of the 'age of ideals' is light hearted and insincere, however there are several poignant facets of this dissection of society that are worthy of note. The duality of human nature, whilst being an over-used speculation is particularly applicable in the play, as it is the habit of the characters to have sincere feelings and yet be incapable of showing them at all. The motiveless and consequently worthless existence of the upper classes is starkly compared to the diligence of a few hard working men of the lower echelons measures up unfavourably. Whereas the objectification of women is quite clearly the biggest irony in the play; as is quite clear from the actions of Gwendolen and Lady Bracknell, they are in fact the ones in charge. Oliver Turnbull 7JLM ...read more.