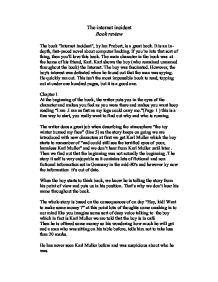 The internet incident Book review The book "Internet incident", by Ian Probert, is a great book. It is an in-depth, fast-paced novel about computer hacking. If you're into that sort of thing, then you'll love this book. The main character in the book was at the home of his friend, Karl. Karl shows the boy (who remained unnamed throughout the book) the Internet. The boy was fascinated. However, the boy's interest was defeated when he found out that the man was spying. He quickly ran out. This isn't the most impossible book to read, topping out at under one hundred pages, but it is a good one. Chapter 1 At the beginning of the book, the writer puts you in the eyes of the character and makes you feel as you were there and makes you want keep reading "I ran .I ran as fast as my legs could carry me."(Page 1 ) this is a fine way to start, you really want to find out why and who is running. The writer does a great job when describing the atmosphere "the icy winter burned my face" (line 5) ...read more.

when he got inside he saw that everything was dirty and there was coffee mugs on the table e that were also dirty but Karl said " this is not much but I call it home" by this we become conscious that Karl doesn't care much about were he leaves. At on one corner there was a computer that was the cleanest place of the whole apparent he asked the boy if he new what that was the boy wasn't sure it's a computer isn't it?" Karl then assured him and told him the specifications of his computer. The boy asked Karl what it was for. Karl said "that was his window to the world the after a while he asked the boy to name a place he said "china" then Karl said first of all we'll take a trip to Hamburg. Chapter3 The boy gets in to a fight and after a month goes back to see beagle Karl appeared from somewhere and was concern about what happened to the boy and invites the boy to The friendly caf� "hop into my car and let me buy you a cup of coffee."(p15) ...read more.

Helmut was really angry then he offered the boy if he wanted to become part but the boy refused the he was kidnapped again "struggling'll do you no good," the kidnapers were not the same as last time . Chapter7 The kidnappers brought him to the fairground "I had no idea why my kidnapper had decided to bring me to a fairground." They went into the ghost train .They thought that the boy was a hacker The kidnappers told the boy to give Helmut a message . chapter8 The boy didn't give the message to Helmut. Karl told the boy something about Helmut "he's a very dangerous guy" (p46) Chapter 9 On School holidays the boy sees smoke on the park coming from the distance and realizes that it was Karl's car and the driver was still in, it was Helmut burned in the car. Chapter 10 The boy goes running into Karl's apartment and tells him what he saw then they hear some one knocking on the door, it was the police and FBI Karl gets arrested for computer piracy and the boy manages to escape Chapter11 The boy tells us that all this has happened almost ten years ago And we realize that the beginning it's actually the end and it starts to make sense. ...read more.