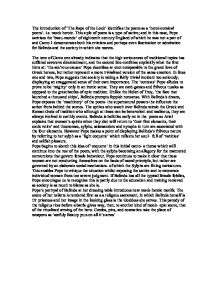 The introduction of The Rape of the Lock identifies the poem as a heroi-comical poem- i.e. mock heroic. This style of poem is a type of satire; and in this case, Pope satirises the beau-monde of eighteenth century England

The introduction of 'The Rape of the Lock' identifies the poem as a 'heroi-comical poem'- i.e. mock heroic. This style of poem is a type of sattire; and in this case, Pope satirises the 'beau-monde' of eighteenth century England of which he was not a part of and Canto 1 demonstrates both his crticism and perhaps even fascination or admiration for Belinda and the society in which she moves. The tone of Canto one already indicates that the high seriousness of traditional topics has suffered severeve diminishment, and the second line confirms explicitly what the first hints at: 'the am'rous causes' Pope describes ar enot comparable to the grand love of Greek hereos, but rather represent a more trivialized version of the same emotion. ...read more.

With Belinda's dream, Pope exposes the 'machinery' of the poem- the supernatural powers the influence the action from behind the scenes. The sprites who watch over Belinda mimic the Greek and Roman Gods of tradition who although at times can be benevolent and malicous, they are always ivolved in earthly events. Belinda is belittles early on in the poem as Ariel explains that women's spirits when they diet will return to 'their first elements, their souls retire' and thesnomes, sylphs, salamanders and nymphs in turn are associated with the four elements. However Pope makes a point of displaying Belinda's frilvous nature by referring to her sylph as a 'light coquette' which reflects her soul- full of 'vanities' and selfish pleasure. ...read more.

This enables Pope to critique the situation whilst exposing the sattire and to exonerate individual women from too severe judgment. If Belinda has all the typical female fobiles, Pope encourages us to recognize this is partly due to the education and training recieved as society is as much to blame as she is. Pope's portryal of Belinda at her dressing table introduces new mock-heroic motifs. The scene of her toilette is rendered first as a a religous sacrament, in which Belinda herself is thr priestess and her image in the looking glass is the Goddess she serves. This parody of the religous rites before a battle gives way, then, to another kind of mock- epic scene, that of the ritualized arming of the hero. Combs, pins, and cosmetics take the place of weapons as 'awfuly Beauty puts on all it's arms' ...read more.