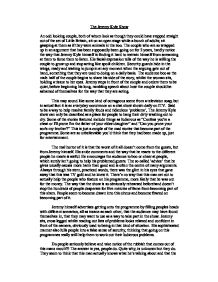 The Jeremy Kyle Show An odd looking couple, both of whom look as though they could have stepped straight out of the set of Little Britain, sit on an open stage while a bunch of adults; sit gawping at them as if they were animals in the zoo. The couple who are so wrapped up in an argument that has been supposedly been going on for 2 years, hardly notice the way that Jeremy Kyle himself is finding it hard to restrain himself from screaming at them to force them to listen. His facial expression tells of the way he is willing the couple to grow up and stop acting like spoilt children. Security guards hide in the wings, ready and waiting to jump in at any moment when the arguing gets out of hand, something that they are used to doing on a daily basis. ...read more.

Some are so unbelievable you'd think that they had been made up, just for entertainment. The real horror of it is that the worst of it all doesn't come from the guests, but from Jeremy himself. His snide comments and the way that he reacts to the different people he meets is awful. He encourages the audience to boo or cheer at people, which surely isn't going to help his problemed guests. The so called 'advice' that he gives usually causes more harm than good and is often the centre of many arguments. Always through his stern, practiced words, there was the glint in his eyes that gave away that this was TV gold and he knew it. There's no way that this man set out to actually help the people who feature on his programme, more likely that he was out for the money. The way that the show is so obviously rehearsed beforehand doesn't stop the hundreds of people desperate for five minutes of fame from becoming part of this sham. ...read more.

The way some people carry on about this programme would have you thinking that it was a quality and useful thing to watch! A gathering of bored and easily lead people who take part in it the show or opt to be in the audience are gathered from different area's in the UK all with different opinions to add to what is going on. The way that the programme is advertised is deceptive, therefore some people must be lulled into a false impression that it could help them, when in actual fact it will most likely cause more harm than good. Overall, all that can be said for the Jeremy Kyle Show is that it is a huge deception. Said to solve any type of family problem, it actually fuels family feuds rather than resolves them. When are people actually going to learn that to sort out their life, applying to a television programme like this really isn't going to help? ?? ?? ?? ?? ...read more.