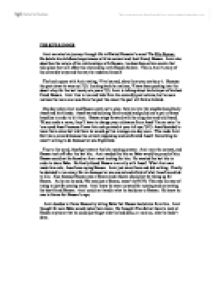 Amir narrates his journey through life in Khaled Hosseini’s novel The Kite Runner.

He details his childhood experiences with his servant and  best friend, Hassan.  Amir also describes the nature of his relationships with Hassan,  he describes certain events that take place that will affect his relationship with Hassan forever.  This is Amir’s story of his cowardly ways and the way he redeems himself.

The book opens with Amir stating, “I’ve learned, about how you can bury it.  Because the past claws its way out.”(1)  Looking back he realizes, “I have been peeking into the desert alley for the last twenty six years.”(1)  Amir is talking about his betrayal of his best friend Hassan.  Amir tries to run and hide from his cowardly past actions, but he soon realizes the more one runs from the past the closer the past will follow behind.

One day when Amir and Hassan went out to play, they ran into the neighborhood bully Assef and his friends.  Assef started bullying them around and pulled out a pair of brass knuckles in order to hit Amir.  Hassan steps forward with his sling shot and told Assef, “If you make a move, they’ll have to change your nickname from Assef ‘the ear eater’ to ‘one eyed Assef  because I have this rock pointed at your left eye.”(42)  Assef decided to leave them alone but told them he would get his revenge one day soon.  This made Amir feel like a coward because his servant stepped up and confronted Assef.  Something he wasn’t willing to do because he was frightened.

True to his word, Assef got even at the kite running contest.  Amir won the contest, and Hassan took off after the last kite.  Amir needed the kite so Baba would be proud of him.  Hassan could not be found so Amir went looking for him.  He wanted the last kite in order to show Baba.  He finally found Hassan in an ally with Assef.  What Amir saw made him sick;  Assef was raping Hassan.  Amir just stood there and did nothing.  Finally he decided to run away. He ran because he was scared and afraid of what Assef would do to him.  Also because Hassan was a Hazara and a Sunni should not be taking up for Hazara.   As he ran he said, “He was just a Hazara, wasn’t he?”(77)  This was his way of trying to justify running away.  Amir knew he was a coward for running and not saving his best friend Hassan.  Amir could not handle what he had done to Hassan.  He knew he was to blame for Hassan’s rape.

Amir decides to frame Hassan by telling Baba that Hassan had stolen from him.  Amir thought for sure Baba would make them leave.  He thought if he did not have to look at Hassan anymore that he could just forget what he had done, or more so, what he hadn’t done.

He committed another act that would haunt him in the future.  Instead of stepping up and admitting his wrong doing, he tried to escape it.  As the novel continues and the Taliban take over Afghanistan, and the country becomes a war torn country.   Amir and Baba decide to leave for America.  Amir thinks traveling to America would erase his memories and his cowardly actions would disappear.  He soon realized after reaching America this was not going to happen.  He still felt like a coward.   Running away is probably the most gutless thing he could have done.

First Amir lets Hassan take up for him because he was scared. Second Amir does nothing when Hassan is getting raped, which makes him an even bigger coward in his own eyes.  Third he sets Hassan up by claiming that he stole birthday presents from him.  He wanted him gone so he would not have to face what he felt so badly about doing.  It was too hard for him to see Hassan everyday.  So the coward way out is to get him to leave.  Fourth when Amir leaves for American he thought he could run away from the past.  Amir was just too much of a coward to face him.

Amir is a coward in several ways threw out the book.  The one act that haunted him the most was Hassan’s rape.  Amir never comes to gripes with his roll in Hassan’s rape, Although he does find a way to redeem himself.   He finally comes to terms with his past, he rescued Sohrab, Hassan’s son from the Taliban. “There is a way to be good again.”(2) This statement reminds us that we are all human, fighting a lot of the same battles in life, just different circumstances.