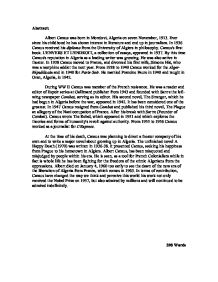 The Life and Times of Albert Camus.

Abstract: Albert Camus was born in Mondovi, Algeria on seven November, 1913. Ever since his childhood he has shown interest in literature and end up in journalism. In 1936 Camus received his diploma from the University of Algiers in philosophy. Camus's first book. L'ENVERS ET L'ENDROIT, a collection of essays, appeared in 1937. By this time Camus's reputation in Algeria as a leading writer was growing. He was also active in theater. In 1938 Camus moved to France, and divorced his first wife, Simone Hi�, who was a morphine addict the next year. From 1938 to 1940 Camus worked for the Alger-R�publicain and in 1940 for Paris-Soir. He married Francine Faure in 1940 and taught in Oran, Algeria, in 1942. During WW II Camus was member of the French resistance. He was a reader and editor of Espoir series at Gallimard publisher from 1943 and founded with Sartre the left-wing newspaper Combat, serving as its editor. His second novel, The Stranger, which he had begun in Algeria before the war, appeared in 1942. It has been considered one of the greatest. In 1947 Camus resigned from Combat and published his third novel, The Plague an allegory of the Nazi occupation of France. After his break with Sartre (Founder of Combat). Camus wrote The Rebel, which appeared in 1951 and which explores the theories and forms of humanity's revolt against authority. ...read more.

Camus lost his father to world war one when he is one year old. Raised by his mother alone, Camus lived in poverty as a child and managed to complete his education with the generous aid of scholarships. When he reached the university, Albert Camus showed great talent as a philosopher and writer. He also started a drama company, wrote plays and acted in them. As a young man, Camus contracted tuberculosis, which prevented him from teaching. As a result, he started on a career as a journalist and writer in 1938, just as the Nazi regime was rising to power in Germany. As war broke out in Europe a year later in 1939, Camus moved to Paris and completed his first novel, The Stranger. The Stranger is about a young clerk named Mersault who is a "stranger" to most normal human reactions to life. Mersault shows no feeling and at the height of the novel, kills an Arab without even knowing why. In his trial, he openly talks about the killing and admits his guilt. The book is all about "the absurd" nature of this man's life. When the Nazis occupied France, Camus was forced to flee to Algeria in 1941. A year later, he returned to Paris to join the French Resistance against the Nazis and worked as an underground journalist. ...read more.

His beliefs and approach on life, is known in modern term as "Existentialism". It is a belief without God, a belief in which humans are blamed for responsibility for consequences that comes. Camus has clearly been undermined with this way of thinking; he has never blamed anyone for anything but to accept situations. In all of his novel it is shown that many suppression received by minority groups, should be fought and that people do not have the need to lead a common life in absurdity but can be liberated and gain freedom. All in the name of one's action and effort put into it. Terms & Glossary (In Order of Appearance) 1. Philosophy - Investigation of the nature, causes, or principles of reality, knowledge, or values, based on logical reasoning. 2. Morphine - extracted from opium, a powerful, habit-forming narcotic used to relieve pain. 3. Addict - A person that is bonded into the need of a certain substance. 4. Allegory - A story, picture, or play that represent something else/ has another meaning. 5. Colonialism - exploitation by a stronger country of weaker one; the use of the weaker country's resources to strengthen and enrich the stronger country 6. Nobel Prize - an annual award for outstanding contributions to chemistry or physics or physiology and medicine or literature or economics or peace. 7. Ideology - A set of beliefs that form the basis of a way of thinking. ...read more.