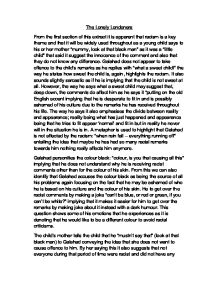 The Lonely Londoners Analysis. From the first section of this extract it is apparent that racism is a key theme and that it will be widely used throughout as a young child says to his or her mother mummy, look at that black man

The Lonely Londoners From the first section of this extract it is apparent that racism is a key theme and that it will be widely used throughout as a young child says to his or her mother "mummy, look at that black man" as it was a "little child" that said it suggest the innocence of the comment and also that they do not know any difference. Galahad does not appear to take offence to the child's remarks as he replies with "what a sweet child!" the way he states how sweet the child is, again, highlights the racism. It also sounds slightly sarcastic as if he is implying that the child is not sweet at all. ...read more.

A metaphor is used to highlight that Galahad is not affected by the racism: "when rain fall - everything running off" entailing the idea that maybe he has had so many racial remarks towards him nothing really affects him anymore. Galahad personifies the colour black: "colour, is you that causing all this" implying that he does not understand why he is receiving racist comments other than for the colour of his skin. From this we can also identify that Galahad accuses the colour black as being the source of all his problems again focusing on the fact that he may be ashamed of who he is based on his culture and the colour of his skin. ...read more.

By her saying this it also suggests that not everyone during that period of time were racist and did not have any issues with people who did not have the same ethnic or cultural background to them. However, this is easily questioned as later it states that "if they were alone she might have talked a little" to Galahad indicating that her appearance and reputation is important to her in the community that she is in as well as how someone can change so easily depending on the company they are in. To avoid any more conversations with Galahad "she pulls the child along" inferring that she easily gives into peer pressure and prides her reputation over the treatment of another human being. This can also indicate that she feels guilty the way she has treated him and instead of having to face Galahad she walks off. ...read more.